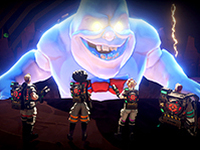 The new Ghostbusters comes out this week and looks like it is doing well in the reviews so far but just in case you want a bit to tide you over until Friday the new game based around the new story's event is here. That's right, Activision and Sony have brought their latest addition into the video game portion of the franchise to us and it is linked a bit and out now for the PS4, Xbox One, and PC. Hopefully this version of Ghostbusters isn't just a cheap tie-in for the film even though that has always been the concern since it was first announced. At least it was for me…

It was shown off a bit before but this new Ghostbusters title looks and plays a lot like a Gauntlet style of game only here we get to take on the role of a few new rookies to the team. Sadly, that means that the story for the game is all after the events of the new film and will most likely have a few spoilers in it. A lot like the Amazing Spider-man did back when that film came out. Hopefully they keep the spoilers to a low in the story here as we might see who is still alive or dead like in the other mentioned title. That is always an issue when building off a story that hasn't come out yet. Let's hope the writers took that into account.

Now while we wait to get the new Ghostbusters downloaded we can take in the new trailer for the game to see the humor that is coming and then play it a bit before the film finally launches. It does look like it will be a blast and is using some tried and true gameplay mechanics here. Hopefully Activision didn't try to fix something that was never broken. Hopefully. I guess we'll find out today after the game goes live on the respective platform stores. Here's to waiting again.

Ghostbusters is a third-person action role-playing game featuring single-player and local couch co-op multiplayer for up to four players. Taking place after the events of the film, players command a squad of rookie ghostbusters through Manhattan’s most haunted environments, discovering hidden collectibles and ridding the city of rogue spirits. There are four distinct heroes to choose from, and each character can be upgraded with new gear and abilities throughout the adventure. Ghostbusters is available today on the PlayStation 4 computer entertainment system, Xbox One and Windows PC via Steam.

What are your thoughts on the new Ghostbusters in video game form or film form? Do you think there will be accidental spoilers in the game here for the film? Do you think the writers were smart enough to keep things vague enough that those who see the film will get the joke or reference or will it be something like "It sucks this person died" kind of thing? Let us know your thoughts and feel free to discuss in the comments below. For more on Ghostbusters we'll hopefully have those updates here on the site. Be sure to lookout for that and a review of the game in short order.