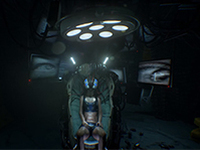 Another new title, Observer, was announced during E3 and we have some gameplay for Observer to look upon and get ready for the fear

It's games like Observer that make me want to see E3 get spread over a few more days than the short few that we do get. You may or may not have heard of its announcement during the PC Gaming show but here we go with the next major title out of Bloober Team. They would be known the best for Layers Of Fear; another horror title set in a specific timeline but here we go into s cyberpunk setting for Observer. They knocked it out the park before but can they catch lightning in a bottle again with their horror? I guess we'll find out whenever the game launches but for now we have a few bits of detail and some gameplay to gaze upon.

As it looks here, in Observer we play a character who is part of a special psycho-police unit aptly names "Observers." Normally they are tasked and governed to dig into the minds of the populace for some reason or another. It's the government so you know how that usually goes. The only difference here is that Dan, the protagonist, goes out on his own and starts to dig into the minds of the dead. Something that makes his mind twist into a horrible mess of fear and madness. Sounds to me like the weird supernatural stuff will be removed from their winning formula and replaced with a crazy mind trip. Could be interesting indeed…

“You play as Dan a member of a special psycho-police unit called the Observers. Observers are equipped with Dream Eaters – a strictly governed by the law devices that give them the ability to dig into people’s minds and memories. The events in the game will force Dan to forget about regulations and common sense and do what is strictly forbidden – dig into the minds of the deceased, twisted by fear, body augmentations and madness.”

Currently Observer is slated for a release on Windows PC without a date set or speculated upon. Given how Bloober Team has gone multi-platform in the past this could just be the announcement so far given that they did it during the PC Gaming show at E3. I guess we'll see but it looks like they are using an engine that can easily port out to all of the platforms as long as they have the funds and time. We'll just have to wait and see though.

What do you think about Observer here and where the team is taking us? Do you think it will be another Layers Of Fear just in a cyberpunk universe or will it use completely new tactics to drive home the fear? Do you think they will end up going multi-platform here or will it stay just a PC title? Let us know and feel free to discuss in the comments below. As we get more on Observer in any way we will have it up here on the site. Be sure to stay right here so you don't miss a single thing.