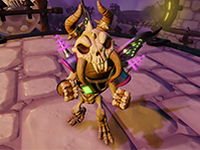 Just as with every year since the franchise's start we have Skylanders Imaginators as the new addition to the franchise. We had the announcement that Toys For Bob is working on bringing us something new for the franchise and genre but at E3 Activision had a nice showing of the game from a bit of behind the scenes. We were allowed to see Skylanders Imaginators while out on the floor and also had a nice description of what will be coming to this franchise to make us shell out even more cash for the game and toys. All of which launching on October 16th for the PS3, PS4, Xbox 360, Xbox One, and Wii U.

Unlike all of the previous showings for the franchise this one focused completely on Skylanders Imaginators' new feature of allowing us to create our own character in the game, play them, and then take them to our friend's games as well. Of course based on logistics this is only available in-game and not for the actual toys we purchase. The physical toy that will allow us to do this is more or less a statue that will store all of the data but we do get a whole plethora of options to customize with. As a note, each statue here will define the elemental type of the character and everything else will be user selected.

In Skylanders Imaginators Toys For Bob does give us all the options that we could want to craft our characters in the game. Each part of the body can be modified and filled with parts found in the game or brought along with heroes, called Senseis in game, for this game. Just as you would think the usual Head, Torso, Legs, etc. can be modified quickly. If you are feeling an extra level of creative you can dig down and modify everything in detail, including colors, but as they pointed out this is for a more advance user. It is quite detailed so I have a feeling many kids will skip on by all of that.

Another interesting feature we will get in the game is the ability to alter the character's voice, music, and catch phrase that they say. Again Skylanders Imaginators will load up with select options to choose from but more can be unlocked just as body parts and gear in the game. You can get some pretty creative options thrown together that will add to the overall humor of the game from what I could see but again it will take a lot of time and effort to nail down specifics for the target demographic so much of this may just be skipped.

Outside of all the visual aspects of the characters you can choose in Skylanders Imaginators there are also the character classes that we can choose in the game. These will dictate the special attacks and abilities that we will get and unlock along the way. Also when Senseis join in the mix they can unlock extra special things just for that class so there will be a reason to purchase more of the named characters of the franchise this go around. As an FYI Crash for the PlayStation version of the game is a Sensei for the Brawler class so those gamers will have further options and a character with specific moves based on the specific franchise.

All in all, Skylanders Imaginators does seem like a great progression for the overall franchise and genre. The main drawback, as with all of them, we are required to buy more than just the toys to craft all of these cool beings. Yes, there is a whole new portal and starter pack for Skylanders Imaginators and a whole new game disk to pick up as well. It would have been much cooler to allow us to just purchase the elemental toys and build what we want with a nice little expansion added on but then Activision wouldn't keep up with their ever growing franchise the same way. I won't lie though…I see a purchase of the game and all of the elemental types in the near future for me.