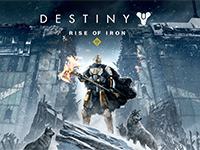 The next large expansion for Destiny has been revealed as Destiny: Rise Of Iron and it brings all of the huge enhancements that one would expect in this expansion

It's been teased and "leaked" but now we have official word that Destiny: Rise Of Iron is the next huge expansion coming for the franchise from Bungie. I'm guessing that Activision thought it best to just out it before the upcoming huge E3 reveal due to all of the "leaks" but none the less we have the new expansion. At least the new expansion for those who have Destiny on the Xbox One or PS4 already. Or at least if they are looking to pick it and all of the other expansions up before this one drops on September 20th this year. Yes this one requires you to have the major expansions leading up to now already.

Destiny: Rise Of Iron is taking the fight back to where the full journey for the franchise was born. It brings with it a new location (Earth: Plaguelands), new raid, new strike, new gear, new weapons, and a competitive multiplayer mode for us all to love and enjoy. Pretty much just what one would expect here but now we have it all laid out for us. There is also mention of other updates but those will most likely all be coming as we head toward the launch of this new expansion as is usually the case with these kinds of games. At least we have a nice new trailer to spy upon for this expansion to get us all amped up even more. If you are still into the game after all this time at least.

"We have been working hard with our partners at Bungie and are planning great, new content for Destiny's 30 million registered players. Rise Of Iron is the first step in fulfilling that promise," said Eric Hirshberg, CEO of Activision. "There's a ton of content packed in Rise Of Iron, including a new location, a new Raid and a new Strike, combined with more quests, weapons, gear, a competitive multiplayer mode and more that we think players are going to love."

As a nice added bonus all Destiny: Rise Of Iron players will be able to acquire the Gjallarhorn, a fan favorite weapon making its return. Those players who preorder beginning June 9th will receive the limited-edition, black and silver Iron Gjallarhorn as a true bonus. If you are unfamiliar with that weapon then you didn't watch the above trailer or played the game enough to have seen it at one point in the game's history. Now you'll be able to have it and use it as you wish.

Are you glad that Destiny: Rise Of Iron is going to be taking us to a new location on Earth? What other weapons and gear do you think will be making the trip back or be added for the first time? Are you still that involved in the franchise to care about the expansion here? Let us know and discuss in the comments below. For more on Destiny: Rise Of Iron keep your attention here as we will keep updating you on the expansion as new details come out. Hopefully after E3 here next week.