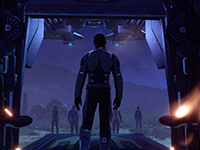 We all wanted and demanded it and now it looks like Firaxis Games has given in and now we have XCOM 2 on its way to the major consoles as well. Of course they are not doing the work directly as 2K Games has brought on The Workshop to help usher the game over to the new platform but given their history that isn't a bad thing. Especially since now we can all keep an eye out to see XCOM 2 hit the PS4 and Xbox One on September 6th of this year. If you don't live in the North American region that date would be September 9th. Not much more of a wait for a game that has already done so well.

If you were hoping for anything extra to be coming with this new release of XCOM 2 you are going to be a little sad as that is all of the news and updates for the game that will be coming. It would have been nice to expect something extra but the fact that the game is hitting a broader audience now just over six months from the original release will have to do. As to why 2K Games didn't hold off on releasing the game without the consoles mixed is a bit beyond me but now they are tackling that market for the title. Just seems odd to have it release so soon after when there was no word it would ever do so before. I'll stop complaining and just go with it I guess.

“The incredible reception of XCOM 2 has been rewarding and humbling for the team, and we’ve known console fans have been clamoring to play the game too,” said Jake Solomon, creative director of XCOM 2 at Firaxis Games. “As avid console players ourselves, we’re excited to work with The Workshop to bring XCOM 2 to all of our fans.”

Were you holding out hope that XCOM 2 was going to hit the consoles or did you give in and pick it up on the PC. Does the timeline seem odd to you or was it just a waiting game to see if they could port it over and keep the same level of detail? Do you think this success means we could see an XCOM 3 not far off? Let us know and discuss in the comments below. For more on XCOM 2 coming to consoles and in general, be sure to stay right here as we will update you just as fast as we get updated here.