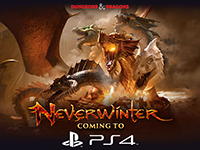 It looks like the PS4 crowd is finally going to get a great taste of Dungeons & Dragons as Neverwinter is finally making its debut on the platform. Only a few years after Cryptic brought the MMO to the PC and a year after it made its way to the Xbox One but none the less it is coming. Neverwinter is coming and it is slated for sometime this Summer at its current pace. Get your Monster Manuals and Player's Guides ready now as you will get to dive deeper into the lore of the universe.

Of course there is more to it than just Neverwinter heading on over to the PS4. It is also heading over with all of the character classes and expansions to date. That would be eight and nine respectfully. No having to shell out for all of the goodies that have been missed over the last few years since it first debuted so you can sit back and be happy about that. We all hate having to play catch up and having to do so by paying for a lot of DLC that we have missed out on.

In fact there won't be any paying at all to get Neverwinter on the PS4. Perfect World has also thrown out the little tidbit that there will be no need to even pick up a PlayStation Plus account to play and the game will be free-to-play for all who have the system and an internet connection. How they will make money on all of this is anyone's guess but I am sure that there is a plan for that. That is what they are all in business for and it would be a great loss to them to give us all something this big for free.

Are you glade to see Neverwinter making the leap onto the last of the current gen systems? Have you been playing the game for a while now and just have another avenue to experience it on? Do you think that this is all in preparation for some huge title they are all working on to hit the market soon after? Let us know and discuss in the comments below. For all things Neverwinter be sure to keep your eyes and browser locked into the site here. As we get more we will share it on out.