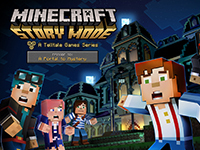 The release date for Minecraft: Story Mode sixth episode has been set and it seems like the Minecraft community is being drug into the game's murder mystery

The first of the three add-on episodes for Minecraft: Story Mode has now been dated and it looks like June 7th is going to be the date that we all get to continue the story. I am still not completely sure why Telltale Games broke up the story and continuations as they did but it has been done and the spiritual second season, in my opinion, has begun. Get ready to dive deeper into Mojang's world as Minecraft: Story Mode episode six hits the PS3, PS4, Xbox 360, Xbox One, PC, and mobile platforms. All in a weird murder mystery setting…?

That's right. As it turns out after the events of the last episode of Minecraft: Story Mode we are heading into a story that sets us in a murder mystery of sorts. One that will have Jesse and crew trying to figure out who has been doing some killing and who has been killed. All with the help of some of your favorite YouTubers who show you Minecraft stuff when you are not playing the game on your own. You can read that as the cast just became a bit more expanded for at least this episode now.

It turns out that these streamers are the ones in the middle of all of the murdery fun in the world of Minecraft and you will be "playing" alongside them to solve the mystery. You can see these streamers talking about what they are bringing to the game just below but for those who want to know the list of streamers and their in-game characters are Joseph Garrett as Stampy Cat, Stacy Hinojosa as Stacy Plays, Dan Middleton as DanTDM (The Diamond Minecart), Lizzie Dwyer as LDShadowLady, and Jordan Maron as CaptainSparklez. Hopefully you see a name you recognize there and let the excitement build.

Are you excited to continue the story of Minecraft: Story Mode with episode six next week? Do you think that adding in these "personalities" for the story is going to really help or will it just draw in more of the general crowd who never gave Telltale the time of day so far? Do you think that this should just be a season two and not some add ons? Let us know and discuss in the comments below. For more on Minecraft: Story Mode and its future episodes be sure to stay locked into the site here as we have two more to go and we'll bring it all to you.