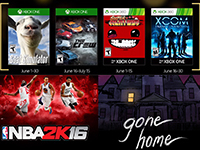 A new month is almost on us here with June and that means new video games that we are going to get for free. Well video games that you will get for free if you are part of the PlayStation Plus or Xbox Gold services. If you are then you may be in for a treat as the list of titles going live starting next month is here and we have it for you. Again we get to expand out titles on the Xbox One and PS4 without needing to make any extra spends at our local stores.

Not a bad spread around this time as it comes to the free video games from both sides of the fence. The only real issue I have is that I already own most of the titles here personally but that is a good thing for all of you out there who don't. I do find it a bit fishy that we had two God Of War titles here back to back and with E3 coming up in two weeks now I'd like to think that means something. It most likely doesn't outside of a bunch of new gamers getting to play the games but one can hope.

Here is the list of games we will all get for our PlayStation systems starting on June 7th of 2016.

Here is the list of games we will all get for our Xbox systems starting on June 1st of 2016.