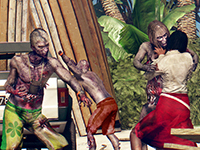 Just over a month now and the Dead Island Definitive Collection will be releasing on the PS4, Xbox One, and PC for all of those who missed out before to give the games that put Techland on the map a go. I'm not talking in any kind of backwards capability form either as Deep Silver has footed the bill to get the two big titles to play natively. That would be Dead Island and Dead Island: Riptide for those who have become lost in all of the hullabaloo up until now. Although I know I would have enjoyed Escape to have been brought over as well.

Hopes and dreams aside though, it looks like we have a fresh batch of screenshots from all of the updated Dead Island stuff here to look at. Mostly it looks like it is from the original title and not the expansion but it does look like it could hold a bit of a candle up to Dying Light for now. Of course all of these things have only been updated and not completely re-worked so it won't feel too much like a brand new game unless all of the UI changes and physics stuff truly alter the experience to make it feel at least 100% new. None the less things are looking good.

Currently the Dead Island Definitive Collection is slated to release on May 31st for aforementioned platforms. It will obviously feature the upgraded visuals and all the tech advancements to pull that off but it will also include features that are now available on the next gen platforms the original titles never had as well as the mod from the original PC version that gave us all Power Fists. You can pick up the whole bundle for $39.99 USD or digitally you can get each title separate for $19.99 USD each.

Does it look like both Dead Island have received the upgrades they both deserve here? Are you curious as to why the "Escape From" title has still be left out of the next gen jump? Do you think this will do more to pull players away from Dying Light and into the games that started all of that? Let us know your thoughts and feel free to discuss them all in the comments below. For more on this Definitive Collection and on the Dead Island franchise in general be sure to stick around right here for all the updates.