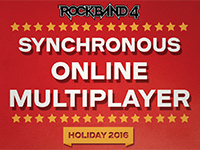 We may not be getting a PC version of Rock Band 4 anytime soon but we are all finally getting online multiplayer for the PS4 and Xbox One version of the game. Yep, one of the most requested features for the game is finally coming back and Harmonix is hard at work to do it again. Sadly though it looks like we will be waiting quite a bit more time to play against/with our friends online in Rock Band 4 as it is currently on the list of updates coming by Holiday of 2016. So closer to the end of the year and over a year since the title first launched.

As is to be assumed, the synchronous online multiplayer coming to Rock Band 4 is going to play just as Quick Play currently does with the difference being that you will be able to play with your console friends over the internet. Outside of that, there really isn't anything else to announce about the new feature. It is still in development so I am sure we will have to wait a bit longer to get all the ins and outs but at least we know it is coming. Now we just have to play the waiting game…

Of course this isn't the only feature that will be expanding Rock Band 4 and most likely Rock Band VR as we press on with the title. While nothing specific has been claimed by Harmonix as of yet they have stated that they are working on a plethora of other features for the game and some of them are something we have yet to see in the franchise yet. This could be a myriad of anything really but it looks like 2016 and 2017 will bring us a whole lot of new things and songs to rock out to in the safety of our gaming spaces.

Were you one of those hoping that Rock Band 4 was getting an online multiplayer added back in? Does the long wait hurt or are you glad that they are taking their time to make sure it all works out well? What other features do you think will be getting added in that we have yet to see in the franchise just yet? Let us know and feel free to discuss in the comments below. For more updates and details on Rock Band 4 and all of the other titles in the franchise be sure to stay right here for more as we will be on it all just for you.