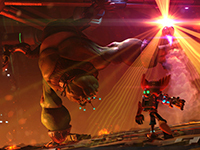 Up to now the joke about Ratchet & Clank's story has been that it is a game based on a film based on a game. Insomniac Games has been very upfront about that in all of their promotions and interviews so there is no surprise there. But it looks like things may be a bit different in terms of story between the game and the film that the game is based on. Hopefully you can follow along with all of that as plain and simple the PS4 very of Ratchet & Clank's story is going to deviate in quite some ways than the film's.

While it is all a reboot, both the film and the video game for Ratchet & Clank are all set in the same universe and timeline so the stories should match up. For the most part they will when it comes to the larger events out there but it turns out that the story for the game will all be told through the perspective of Captain Qwark and not that of the titular characters. This of course means that all of the minor details and events of Ratchet & Clank will be skewed so it isn't a direct adaptation at all. Kind of an interesting path to go but it could pay off big.

Just in case you want to get a taste of the different version of the story so far in the video game version of Ratchet & Clank, we have a new story trailer that shows a bit of a different view from the film that will be releasing on April 29th.

Of course we hear all of this and the fears of film based video game pops up and those have the worst track record ever. Thankfully though it looks like Insomniac Games have been certain to keep the game and film separate as much as possible to make sure we all have a truly unique experience that doesn't feel rushed to tie-in. This is a reboot of sorts to Ratchet & Clank so there is a lot extra riding on it all. I just hope that the story in the game deviates enough so that the film isn't utterly ruined as the game does come out on April 12th.

What are your thoughts on how Ratchet & Clank will be handling the stories for both mediums? Do you think this may be one of the first film "tie-in" games that doesn't flop? On the converse do you think this will be another great film based on a game that doesn't flop? Let us know what you are thinking down in the comments. For more on Ratchet & Clank be sure to stay tuned right here as we will have all of the updates you may want for the game/film in short order.