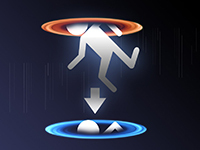 Just when you thought you had survived the world of Portal you are going to get pulled back in. Well that is if you are aiming to pick up the HTC Vive and are willing to download Valve's new trials they are putting out there in the form of The Lab. Yes this is an all new experience for Portal and it is all in VR with all of us getting a solid look at its debut during GDC 2016 next week.

As you can assume there isn't much to go on for this new compilation of VR experiments coming to Portal. What is known is that it will all take place in a small section of Aperture Laboratories. It will be hitting Steam later this Spring for the low price of Free. It will also be one of the best ways to test out the room-scale features of the Vive. You know, if you can get around that fun $800 price point for the device out of the gate. Then these new Portal trials are here for you.

While there isn't much else to go on it does look like a prelude for The Lab has been experienced by some. Here is a look at how you could be entering into the world of Portal again. Enjoy.

Are you excited to hear that there will be more test rooms for Portal here soon? Do you think that many people will be giving them a try even though the software is free but the price of having the VR set up so high? Could this just be a nice lead up to Portal 3 as once the technology becomes more available it will be what fans are looking for? Let us know and discuss away in the comments below. As we get more on this and other VR experiences we'll have them here. Stick around.