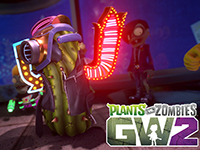 Barely a few weeks out from the original launch of Plants Vs Zombies Garden Warfare 2 and it looks like we are getting our first big update for the game. Just like the game before is looks like PopCap Games is still churning out all of new content we could ever want. Well that is a bit of a stretch as I am sure EA won't fund everything that would ever want but at least Plants Vs Zombies Garden Warfare 2 is getting a new big drop of content here on March 8th and for the low price of Free.

Here we have the Graveyard Variety Pack for Plants Vs Zombies Garden Warfare 2 and outside of the usual character tweaks and number changes it looks like we are also getting a new map, some new missions, and new gameplay/control options added into the mix. Some nice new little changes but nothing I would say is too groundbreaking as I am sure that they are saving all of those cool updates for some kind of paid update. I guess we'll see but as of now this is what we are getting so no point in looking the horse in the mouth here.

Here's the quick rundown of what PopCap Games is releasing to us on March 8th on the PS4, Xbox One, and PC.

Are you glad to see these things coming to Plants Vs Zombies Garden Warfare 2? Do you think that we will see a lot more of these come out or do you think we will see some huge expansion that will have new items from maps to characters added into the mix? Let us know what you think and discuss away in the comments below. As we get more out of EA on Plants Vs Zombies or any of their other titles we will have the updates right here on the site. Stick around as we will have more and you know you always want more.