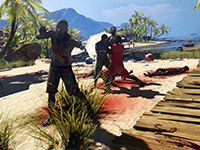 Here we go with another rumor that proved to be true as the Dead Island Definitive Collection has been announced for the PS4, Xbox One, and PC. Rumors of this bundle started to pop up a while ago but then there was no word from Deep Silver on any validity to it all. Now we are seeing Techland's two great installments into the zombie world, before their current magnum opus, coming out yet again with new textures and upgraded to their new game engine. Those titles being Dead Island and Dead Island: Riptide for those who can only think of Dying Light.

For the most part the Dead Island Definitive Collection is just bringing along the usual graphical updates as well as the new features that the latest consoles can offer. Now you will be able to play each with the online 4-player co-op and video streaming/recording. For those who opt to play on the PS4 there will also be the PS Vita remote play and Share-Play options mixed in as well. Everything else just happens to go along with the same old things we get with remasters of older titles. That and reaching a new audience that missed out on the original releases.

If for some reason that just isn't enough it also looks like this nice little package will be bringing another new element into the mix. This element being a new classic side-scrolling/endless runner game called Dead Island Retro Revenge. It has all those retro graphics and gameplay that for some reason is still popular and is all set in the same game universe. Maybe that will help tip the balance on your choice to pick up Dead Island Definitive Collection or not but it does make this technically a third game added in for the price of two. Happy days.

The Dead Island Definitive Collection is currently slated to release on May 31st of 2016 for $39.99 USD. If you don't want to pick up the whole bundle then you can look to get each title separately and digitally for $19.99 USD. It doesn't look like there is a way to buy the retro game out side of the bundle so that is still the best option for your dollar when you break it all down. At least if you want that much zombie in your life while still playing through Techland's current titles and expansions based on the same gameplay.

What are your thoughts on this Dead Island collection? Do you think this is to help bide time for Deep Silver to get Dead Island 2 out or just the norm for the industry now? Do you wish that they included all of the games in the franchise in this new bundle instead of just the two here? Let us know and discuss away in the comments below. As we get more on this and any other video game out there we will have it up on the site. Be sure to check in and check in often for all of that as it comes.