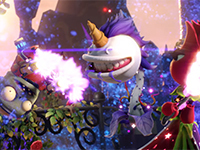 If you can't wait those extra few days to get your hands on Plants Vs Zombies Garden Warfare 2 and have an EA Access or Origin Access account then you can dig into the game right now. That is well before the February 23rd release date but the catch here is that you only get to play for 10 hour's worth of time. I guess that would be enough time to see if PopCap Games has further perfected the craft in Garden Warfare 2. I am pretty sure they have but hey, who doesn't want to be able to play a small sample of a game for free well before it releases? You all do.

Before you think this will be just some small beta build or version of Garden Warfare 2 it will be the full version of the game. You'll just be limited to playing only ten hours before getting locked out until the game's official launch. The next huge bonus…all of your progress you make during this time will carry over into the full game after it launches so there is that extra little bonus to give it a go. No need to be wasting your time just to have a nice little preview right?

Lastly, it also looks like there will be a 10% discount for those who choose to purchase a digital version of Plants Vs Zombies Garden Warfare 2 from now until the game's release. Not the biggest of discounts but then again there never had to be one offered so you might as well not look a gift horse in the mouth. 10% off is still 10% off as long as you are okay with going the digital route and don't need to have the physical copies to add to a huge collection.

Members can download the full game on February 18, and drop themselves into an all-out battle, where for the first time in franchise history, zombies have conquered Suburbia and plants are on the attack. Go on the offensive as the plants in all-new modes including the 24-player Herbal Assault mode, or rally the zombies together and defend against the plants in the 4-player co-op mode, Graveyard Ops. Get into the action with six new character classes and over one hundred playable plants and zombies from the past, present, and future. Experience new ways to play, including Backyard Battleground – a massive, interactive environment that connects you to every map and mode from the start of the game. All of this takes place across all-new maps bursting with personality and humor, making Plants Vs Zombies Garden Warfare 2 the biggest, baddest, craziest shooter out there.

Will you be taking advantage of this early access to Plants Vs Zombies Garden Warfare 2? Are you pumped and ready to head back into this whacky and off-the-wall title? What other goodies do you think that PopCap Games has in store for us in the full game? Let us know and discuss away in the comments below. As more on Garden Warfare 2 comes out up to launch we will try to have it all here for you. Be sure to keep checking into the site for all of that as it comes.