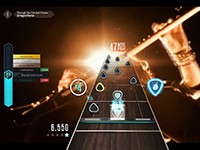 It is finally here as Through The Fire And Flames is coming to Guitar Hero Live. In fact as you are reading this you can know that gamers out there who have turned on FreeStyleGames' title can experience it now in the five day long Shred-A-Thon that is going on at this very moment via GHTV. At least if they are playing Guitar Hero Live via the console version of the game and not any of the other umpteen options that we were all given back when Activision brought the game back into our lives again.

To gain access to the Shred-A-Thon for Guitar Hero Live all you have to do is access the third channel in your GHTV list and it will start right up. Of course it isn't just going to be that one Dragonforce song on repeat and there are a few more songs mixed in but this insane song is the main focus for everything. Just by looking at it play in the following video for Guitar Hero Live's new event makes me want to just place my hands in ice and never pick up a fake guitar controller again.

As I said, there are more songs added into the mix besides just that one for Guitar Hero Live's Shred-A-Thon. Here is the list of songs that are going to be repeated over and over during the event. After February 8th all songs listed that were not already on GHTV will become available during regular play so don't worry if you miss out on what FreeStyleGames has here for us over the weekend. You'll be able to break your fingers in Guitar Hero Live well after it ends.

Are you glad to see Through The Fire And Flames making its way into Guitar Hero Live? How long until you think someone will master the song during this event? What other songs are you still waiting for to come to Guitar Hero Live via GHTV? Let us know and discuss away in the comments below. As Activision doles out more updates on Guitar Hero Live we will have them here for you so be sure to keep checking back in as often as possible. Even if your fingers do get broken over the ensuing weekend.