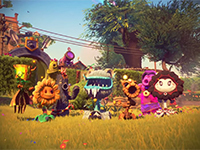 You would be daft to think that Plants Vs Zombies Garden Warfare 2 was going to deviate from the normal set up that we had in the previous game when it came to variants to the core classes/characters. I'm not talking a few new skins that PopCap Games threw together to make it feel like there is something completely different for each of the characters but in some cases, hopefully in Garden Warfare 2, these added different gameplay features into the mix. Now we have a nice view of some of the other Plants coming to the game when it lands on the PS4, Xbox One, and PC on February 23rd.

You can see them in action just below but we have a nice view of the variants that will be hitting the Plants' side of things not only for the new heroes but also the older ones we grew to love, pun intended, before Garden Warfare 2. If you look close enough you can see that some of them are getting a few extra abilities or "flare" added into the mix but if they have solid gameplay alterations for Plants Vs Zombies Garden Warfare 2 is still kind of up in the air. Up in the air as we haven't heard word from EA on those bonuses or not if they exist at all.

For those not in the know, these are other "skins" or characters that will be unlocked during normal play of Plants Vs Zombies Garden Warfare 2 or by purchase directly of in-game cards. That is if this mechanic has been left unchanged by PopCap Games between now and then. I am going to go on a limb and say that the Vampire Sunflower is most likely going to have some kind of life drain attached and hopefully the Yeti Chomper adds a bit of cold damage/slowing effect into its attacks. It would make complete sense after all for Garden Warfare 2 now wouldn't it?

What do you think about the variant plants for Plants Vs Zombies Garden Warfare 2? When do you think we will get to see the variant Zombies in the mix? Does it make sense that each of the plants we saw here for Garden Warfare 2 would have some kind of alteration based on the "skin?" Let us know and discuss in the comments below. As more on Garden Warfare 2 is unleashed by EA we will have those updates here. Be sure to stick around and check in for all of them as we get them. Especially once we see where the Zombies are going to go in this epic battle before us.