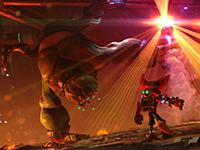 If you were wondering about any of the similarities that the Ratchet & Clank film will have to the reboot video game then you can add the release date to the mix of things as it look like we are set for and April 12th release date for the PS4 title. Of course as this is a reboot and not a remastering of the original Ratchet & Clank we have more to look forward to from Insomniac Games for this new game than just pretty new graphics. Some of which will be set by the film and game to reset the origin story that many PlayStation fans have grown to love. It happens and I look forward to what Ratchet & Clank is going to bring.

Of course the top of that list will be new planets to explore, upgrades control schemes, and new bosses for the Ratchet & Clank franchise. I'm sure we'll get to meet all of them and see all of that in good time but for now that is what we get. Well outside of yet another trailer for the video game with some more new gameplay footage to show off. We might even be able to spot some of those new elements for Ratchet & Clank in the mix if we look close so go ahead and have a look. It is what the video is for.

If you were wondering about the release dates for Ratchet & Clank anywhere outside of the NA region we have those as well for you. They are a bit odd when you look at them as it seems like there is a bit of a delay for the U.K. and an advancement for France but I am sure Insomniac Games has a good reason for that. In France Ratchet & Clank will be landing on April 15th and the U.K. will get the game on April 22nd. The weird part is that the rest of the PAL region will get Ratchet & Clank on April 20th. Like I said; a little weird.

Now that you have a date for Ratchet & Clank are you more or less excited to see how this re-imagining will go? Do you think it will have more of the original elements that fans fell in love with or will those be shoved off into the "Easter Egg" area of the game? Do you find the release dates for Ratchet & Clank a bit odd for the PAL region as I do? Let us know what you think in the comments and discuss away. As we learn more or get more on Ratchet & Clank from Insomniac Games we will have it up on the site for you. Stay locked in for all the updates and video game news.