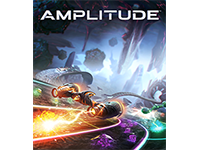 We sit down and review Amplitude. It's been 12 years in the re-making so there is a lot to live up to. Did they do it? Here's our review of Amplitude

It is hard to believe that Amplitude originally came out back in 2003. It truly doesn't seem like that long ago but none the less Harmonix has come together again, with the help of a successful Kickstarter, to bring Amplitude off of the PS2 and onto the PS3 and PS4 for the new generation. This isn't just a port but a true remake of Amplitude. Of course fans of the game have a lot of expectations here and now is the time to dig in and see if they were met. Here is our review for Amplitude on the PS4.

There isn't much in way of story for Amplitude when all is said and done. There is a campaign that you can play through that has a few bits of narrative that give you the sense of why we are blowing up neurons in the subjects brain. More or less we are trying to clear out the bad nodes in the brain so the subject can better understand the music created in Amplitude. That is about the gist I was able to get in way of a true story in Amplitude.

One of the bigger items that bothered me in Amplitude here was the new option to auto-slide to the next available track. In the original version of Amplitude you had to manually move to the next track you wanted. The issue I have here is that sometimes the Beat Blaster would jump to a track that I never saw coming and skip the literal next track to the one I was on. This wouldn't be too big of an issue in general if it wasn't for the fact that there is a necessity to keep you streak up and this would cause incorrect notes to be hit. There is supposedly an option to turn this off in the settings of Amplitude but it is not made presentable enough to even understand how to go back to the classic mode without researching in.

Building on the streak building, one of the issues I always had with Amplitude from before is still here in the way that the "levels" are designed. The psychedelic worlds that we are placed in are pleasing to the eye but when all of the tracks are obscured by the bending and twisting of the game's world you cannot see what note, or in some cases track, is coming next to prepare your fingers to fly. A nice option to lower the bends in the tracks of Amplitude or pulling the camera out when in single player mode would be nice and solve this issue but it does not seem like it is present in the current form of the game.

Lastly, I have a bit of issue with the set list that has been provided with Amplitude. In the original version of the game the songs ran the gamut of genres and speeds. I fully understand licensing issues and I am sure that was part of the issue here for Harmonix but as they personally crafted a third of the tracks that came with Amplitude it would have been nice to have some other variations instead of fast and not-so-fast techno/dubstep songs. Any song style could have worked for Amplitude but all of them fell into a singular category here and a little variation would have been greatly appreciated.

Plain and simple the first thing I loved about the new Amplitude here was that the core gameplay made its way back and felt just as smooth as ever. On the outside it looks like it is a simple set up but once the notes and the music start flying Amplitude ramps up the challenge and still manages to stay accessible to those without the fast fingers most think are required. It's like playing the most amazing QTE portion of any game and being rewarded with parts of a song you didn't hear until then. What wasn't broke wasn't "fixed" here for Amplitude and that is the biggest part I was worried on when I first heard of the remake.

While I do wish there was more of a variety of songs types in Amplitude I can't fully disregard the musical talents of those over at Harmonix. They made up about a third of the set list and each new song I unlocked by them was another favorite in the game. Sure they all fell into the same genre or style as the rest but these songs had to be my favorite in Amplitude by far. Not to discount the other artists mixed in but they could have easily supplanted any of the other artists with different music and these still would have felt like top notch songs written for Amplitude.

Last up on the list is the multiplayer aspect of Amplitude. Another aspect that wasn't too broke before but in this remake it has been upgraded and made to add an extra level to the fun of the game. It could be that good old nostalgic feeling of playing the original Amplitude kicking in but loading up the game and playing at home with multiple buddies to see who can get the better score hasn't been this fun in a while. Many games have tried and many have failed. Amplitude is by far not one of those games. Particularly in the fact that you can team up or go on a free-for-all at any time. Many a friend and enemy have been made in Amplitude passed and more are to come.

If you are into rhythm games at all, or loved the original Amplitude, then this is another great game to add to the mix. Harmonix was able to keep the same feel of the game from so long ago and make it feel new again. I won't downplay the want for more genres in Amplitude's music library or some other gameplay features/options but just as Rock Band has done in the past, this is a great party game for all. Pretty much if you don't like the basic music styles provided and QTE style of gameplay then you can skip Amplitude. Everyone else will enjoy their purchase and so will the friends/enemies that will be brought into the fold during gameplay.

Amplitude was developed and published by Harmonix for the PS3 and PS4 on January 5th, 2015. A digital PS4 copy of the game was provided by the publisher for reviewing purposes.