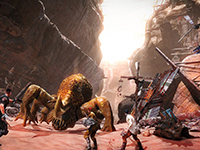 More screenshots for The Technomancer have surfaced and they show off quite a bit of how Spiders is going to be handling the harshness of Mars. Or how we all will be handling the harshness as there are a lot of man-made creatures out there in The Technomancer ready to eat our flesh off or worse. At least that is what we can see from the following new screenshots for the game that Focus Home Interactive has given us for The Technomancer. This won't be the cold, red, desolate planet we were given in Total Recall now will it?

From the looks of things, and a bit of info out of Spiders, most of these creatures used to be native to Earth and ones we would have seen before the exploits of The Technomancer. In a nut shell evolution and genetic engineering have altered these creatures to survive on their new home planet and the populace has tried to control them in The Technomancer. Some of them have been tamed and some not so well by the looks of the following screenshots but at least the designers are giving us some form of explanation when it comes to the story of The Technomancer. Not that they were just lying dormant or some shit.

Have a look for yourself and then get ready for the wait until The Technomancer is finally released. No date outside of "Early 2016" has been given yet but we do know it will be hitting the PS4, Xbox One, and PC all on whatever day that may be. Also not that the graphics and models have been greatly improved since last we saw The Technomancer in action so there is also that to get all hyped over during the wait. If only we could get some more solid gameplay for The Technomancer I would be sold.

What are your thoughts on The Technomancer after seeing these new screenshots for the game? Do you like how they are making sense for the story here or do you even care? What are your thoughts on the visuals for The Technomancer compared to back when we were first shown the game? Let us know in the comments below and discuss away. As we get more on The Technomancer from Focus Home Interactive we will have it up on the site for you. Be sure to stick around so you don't miss out on any of those fun updates and release date announcements.