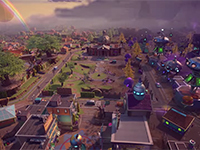 As if there wasn't enough for us in Plants Vs Zombies Garden Warfare 2 it looks like we are getting more in the way of a personal Backyard Battleground. This new mode announced from PopCap Games adds on a little more solo play for those who prefer that as well as more for up to four friends to do in Garden Warfare 2. Who thought that getting a few new characters, maps, and gameplay options in the multiplayer version of Garden Warfare 2 wasn't enough will be delighted to see how expansive the game will be when it hits the PS4, Xbox One, and PC On February 23rd now.

While they don't go into all of the ins and outs of Backyard Battleground here in Garden Warfare 2 we do get to see quite a few little enhancements. Looking at the map, the backyard is split between the two factions with a war zone in the middle. Each side will have a bunch of hidden items, events, and other things to do while roaming in solo mode. This could also include things that will add to your Garden Warfare 2 characters as well as how to enhance them for online play. Not to mention some good story information that can be uncovered in the mix of the madness in the Plants Vs Zombies universe.

Also in the Garden Warfare 2 Backyard Battleground will be a mode where you and up to three other players can face an unending wave of enemies to gain XP and coins that can then be used online. Not only for one side or the other either as you can swap sides in this mode so all of your Garden Warfare 2 characters can get the cool bumps and fun and not just one side. Yet another way I can see players working the system to be veritable Garden Warfare 2 gods online but I am hoping that PopCap Games has a way to curb that so things stay balanced.

I am glad to see that Plants Vs Zombies Garden Warfare 2 is going to have another mode for those who enjoy playing by their lonesome and want more than just a survival mode. That was one of my bigger issues with the original game. Well that and not being able to explore the maps that the developers crafted for us. Looks like those prayers have been answered in Garden Warfare 2 to some extent. Maybe all of those multiplayer maps will be available to roam in some form with this new mode somehow. One can hope right?