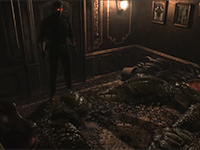 More gameplay for Resident Evil 0's HD remaster has surfaced out of the hiding holes of Umbrella for us to see. This time it all focuses on the new Wesker Mode that Capcom is giving us when the game launches on January 19th next year. This mode isn't anything new in terms of news but now we can see how Wesker will alter the gameplay of Resident Evil 0 in the new mode. Worth noting again though is that this isn't the Resident Evil 0 Wesker we know but the Resident Evil 5 super charged Wesker and the mode can only be unlocked after completing the game once.

What we do have here today though is a good look at how Wesker's abilities will aid the pair when going through Resident Evil 0 again. It looks like he has a Death Stare that shoots out a blast of energy to kill anything in the way as well as a Shadow Dash that does pretty much what it sounds like it would do. As I said, you can see both of these in action for Resident Evil 0 just below. I am sure that Wesker can still use his firearms too but none of that is shown in the following video from Famitsu.

I am used to some ridiculous things being in the Resident Evil franchise but what I just saw for this Wesker Mode takes the cake. Both of these bonus mechanics look almost useless here for Resident Evil 0. The Death Stare does kill the enemies as it states but it has to charge up and looks more like a shotgun blast than a direct shot. The dashing looks like it is about the same way and doesn't really do much. I thought we were supposed to feel like a super being in this mode but instead it just looks like another goofy add-on for Resident Evil 0 to help sales.

What are your thoughts on these moves Wesker has in Resident Evil 0's new mode? Does it fit into the Resident Evil universe here or is it something that Capcom needs to iron out a bit more before the game launches? Does this really entice you to try and play through Resident Evil 0 a second time? Let us know and discuss away in the comments below. As we get more on Resident Evil 0's HD remaster we will have it here for you so be sure to stick to the site for all of that.