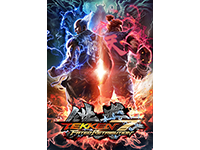 A sequel to Tekken 7's arcade version, Tekken 7: Fated Retribution, has been announced and looks to employ Akuma into the main story

We may still have a bit of a wait to get Tekken 7 on the PS4 and Xbox One but it looks like the arcade version is already getting a sequel called Tekken 7: Fated Retribution. Well more of an updated unless Bandai Namco is taking a page from Street Fighter in terms of naming and alterations. Of course that wouldn't be a huge surprise right now as it does look like Tekken 7: Fated Retribution will be lifting at least on character from the other franchise in the way of Akuma. I guess this is what was being teased during the PGW this year.

While details are still a bit sketchy for now it looks like Akuma will be joining Tekken 7 in more than just a character skin but as a fully developed character and a huge plot point to the overall story. Looks like he has been hired to kill Heihachi in Tekken 7 by Kazumi Mishima. So plot hooks and it looks like his fighting style from the Street Fighter franchise will also make the leap over in some way. I'll label this under interesting and hope to see it when Tekken 7 finally crosses over to the consoles. I never understood story games in an arcade setting…

If you would like to see Tekken 7: Fated Retribution get the announcement as well as Akuma in action, a bit, then you can spy the latest trailer for this update just below. It is all subtitled in English for those who don't natively speak the language but it is just there to help you get the gist of what the character is doing in the Tekken 7 universe.

What do you think of Akuma being in Tekken 7 here? Does it fit in well with what has been established or is it a ploy by Bandai Namco to entice players of the other franchise to give Tekken 7 a go? Do you think Tekken 7: Fated Retribution will make the leap to consoles just as the main game has already? Let us know and discuss away in the comments below. If we get any updates for Tekken 7: Fated Retribution we will have them up on the site for you so be sure to stay glued to the site to not miss out on a thing.