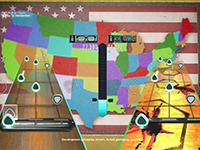 With Guitar Hero Live reaching almost a few months old now, from release, it is time we start seeing the major updates for the game roll out. It looks like FreeStyleGames thinks the same ways as the next major update for Guitar Hero Live is out now and adds in something many have wanted since the game's first launch. That would be a way to play head-to-head on the multiplayer arena for Guitar Hero Live. Make sense given Activision's huge push for multiplayer games and why should this one be left out from all of the predecessors? Right?

In an update that you can download for Guitar Hero Live you will now get to play against another player of your skill level in a multiplayer rock off in GHTV. Of course this is if you have currently hit level 10 or higher in your Guitar Hero Live career so far. If you have then twice every half hour of playing GHTV you will be placed in this Rival Challenge to see who is the better player at the random song selected by the service. Yes it is still all random just like most of Guitar Hero Live's GHTV but it is an option requested so we only have to blame the community for requesting this.

As you most likely saw in the above images, when you go into Rival Mode in Guitar Hero Live you get to see both player's highways on screen so you can gauge who is better the whole time. You can also see what Hero Powers and other upgrades they are using as well so you can see why you failed. If you don't fail though you get 100 more Status XP than normal and all of the bragging rights in Guitar Hero Live with someone you were randomly paired up with. Take that anonymous stranger who plays the same game as I do! Just as the internet is meant to be.

Along with the above announcement for Guitar Hero Live by the way comes a couple extra features in the mix as well. You will be able to "favorite" songs now in GHTV so you can find them easier when playing on-demand style. Also each day you log in if you happen to have zero play tokens you will be granted three bonus play tokens to keep you playing Guitar Hero Live on-demand and trying to entice you to buy more on your own. Who wouldn't want to pay to make sure they can play the game the way they want to? It seems to be the Guitar Hero Live way now.

What are your thoughts on Guitar Hero Live's new Rival Mode? Is it the mode you were hoping for or is it something else that will be used and hardly recognized by the casual players? Do you like the fact that FreeStyleGames is going to give you three free play tokens a day in Guitar Hero Live or is it just another "Freemium" ploy to get you to spend more? Let us know and discuss in the comments below. As more on GHTV or Guitar Hero Live come out from Activision we will have it here for you so be sure to stay locked in here so you don't miss a thing.