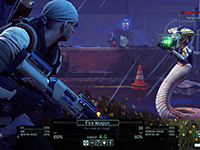 Add another special edition game to your list as XCOM 2 now has its own Digital Deluxe Edition up for pre-order with its own set of goodies. Not only does this one come with Firaxis Games' upcoming XCOM 2 but also the Reinforcement Pack and a digital soundtrack for the game. All for the low, low price of $74.99 USD. You better head on out there and secure your copy for your PC or Mac. It is digital so all you have to worry about is pre-ordering this version of XCOM 2 before February 5th and not worry about lines.

So that is nice and all but what are we getting for XCOM 2 for the extra cash that is being dropped here? The big thing would be that Reinforcement Pack when all is said and done. It offers up three new add-ons with each bringing new missions, aliens, weapons, more extreme soldier customization, and other items to your XCOM 2 experience. I'm not sure if this will add on any extra story bits or lore but it does look like plenty of new gameplay mechanics and such so there is at least that bonus.

The Reinforcement Pack includes the following:

As I stated before you can pre-order XCOM 2 or its Deluxe Edition now and if you do you also get the nice added bonus of the Resistance Warrior Pack. This bit of XCOM 2 DLC will offer additional soldier customization options such as bonus outfits, headgear, and custom facial war paint. The Resistance Warrior Pack also includes a “Survivor of the Old War,” a new XCOM recruit who will appear in the Avenger’s barracks. So you can kind of get four extra bits for XCOM 2 out of Firaxis Games if you shell out the dough right now.

Does this new Deluxe Edition for XCOM 2 tickle your fancy enough to drop the extra cash? Would you rather wait and see how well the game does and drop the $19.99 to buy the extra DLC à la carte? Do all of these prices for XCOM 2 add up to what we already know for PC games? Let us know and discuss in the comments below. If 2K Games reveals anything new for XCOM 2 we will have it here for you. Be sure to check in and check in often to the site for any and all updates we can get out hands on.