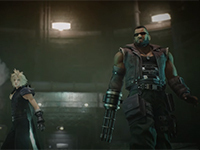 Since Final Fantasy VII Remake was announced back in June and made many fans out there happy little gamers we have been waiting for more and we finally got that over the weekend at the PlayStation Experience in San Francisco. During the huge keynote event a new trailer for Final Fantasy VII Remake was showcased by Square Enix and it looks like they are taking great care to give what has been begged for by many. It is still no Final Fantasy VI Remake in my opinion but it was still one of the greats in the series.

Now that you've seen Final Fantasy VII Remake in action let us dig into some of the more particulars that also came along with the trailer. The big one being the fact that this new version of Final Fantasy VII will be a multi-part series instead of one huge experience. Some say episodic but I see it more along the lines of the multi-disc version of the game with each being released at a later time. It may upset you to hear that but according to the developers over at Square Enix Final Fantasy VII Remake wouldn't be a thing at all if it wasn't for that.

If we were to try to fit everything into one installment, we would have to cut various parts and create a condensed version. But there would be no point in doing that.

For instance, players will be able to explore many different areas of Midgar in this game that they couldn’t access in the original — if we’re remaking this world, we want to add in areas like this and depict them with real detail.

So Final Fantasy VII Remake may be split up into many different parts but it sounds like we are going to have more of the game's world to play around in? I am sold. Especially if they are aiming to keep almost everything from Final Fantasy VII intact and only lose the weaker elements in favor of the newer. Although it is a little saddening to me that the original combat system is mostly being replaced in favor for the newer Final Fantasy XV one but I am sure that is just to keep the development flowing on both as the team is already split up a bit to bring us Final Fantasy VII Remake.

Don't fret too much though for the combat system though as Final Fantasy VII Remake will still keep the basic core stuff we all loved about Final Fantasy VII's combat. I am talking about things like only having to worry about the three characters currently in your party instead of a plethora more. That and also the limit break system. While that will still be in here it has been stated that it will function a little different that it did in Final Fantasy VII. More on that to come at a later time I am sure.

As I stated before, even though it isn't my favorite Final Fantasy title in the franchise after seeing the above and find out a bit more I am still stoked for Final Fantasy VII Remake to finally come to light. There is still no release window and all we know for now is that it is coming to PS4 first. Most likely a few months or so before Final Fantasy VII Remake hits the PC and Xbox One. None the less it looks to be shaping up extremely well and I am sure more will be coming in the following months.

What are your thoughts on what you saw for Final Fantasy VII Remake here? Does it upset you to find out that it will take place over multi-parts or are you okay with that as we will be getting more Final Fantasy VII to play and explore due to that choice? Were you hoping that all of the characters were going to get a real world makeover instead of sticking to a bit more grounded look in the original Final Fantasy VII vein? Let us know in the comments below and feel free to add in your own two cents. Once we have more for the Final Fantasy VII Remake we will have it here for you so be sure to keep a lookout here for more as Square Enix reveals it.