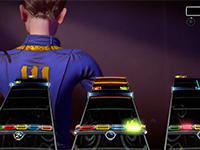 A new gameplay mode for Rock Band 4 has been shown off, Brutal Mode, and it adds a huge spin on Rock Band 4 that many people may not be able to handle

We've already heard of a few great things coming to Rock Band 4 with the next major update for the game. Well it looks like Harmonix had yet another feature mixed in that we are just hearing about called Brutal Mode. As if Expert and Breakneck Speeds were not going to kill us in Rock Band 4 already, now we have a new mode that will not only challenge the hardcore fan but pretty much anyone who is gutsy enough to give Rock Band 4's new Brutal Mode a play. This will not be for the non-nimble fingered for sure.

What Brutal Mode is for Rock Band 4 is a mode where a "force field" hides the nots as they come down the track while playing. The distance between when the notes appear and disappear lengthens or shortens based on how well you are playing the current song. All members of the band currently playing Rock Band 4 must have it activated to be able to play Brutal Mode and it should go without saying that No-Fail mode is set to inactive while playing. If that wasn't enough, you can only play Rock Band 4's Brutal Mode with Expert difficulty on the song. That is going to be brutal.

Rock Band 4's Brutal Mode will be part of the massive FREE update coming this December. If you would like to see this new mode in action, as well as a few of the other new features Harmonix is bringing to Rock Band 4, and you can handle sitting through the paid hype from IGN then you can have a look at it in action just below. It looks to be one challenging mode for those who can't play Rock Band 4 without looking at the screen…like yours truly here.

What are your thoughts on Rock Band 4's new Brutal Mode? Is it the feature that you were hoping for or were you looking to get something else mixed in? Do you think you will even be able to play Rock Band 4 in this mode or will it go unused by you? Let us know and feel free to discuss in the comment section below. As Harmonix updates us all on Rock Band 4 and the new modes, content, and DLC we will have it here for you so be sure to stay tuned in here for all of that. Hopefully it will be more brutal as we head into 2016.