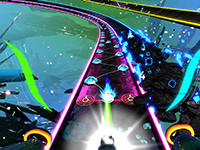 The wait for Amplitude is almost no more as it is official hitting the PS4 on January 5th for all to download and play. Harmonix has been working hard to bring this PS2 classic title back into the fold with a new version of the game and a lot of us are ready to get back in. Amplitude was one of those fun college dorm games I remember and fell in love with so there is no doubt that I am ready for it finally hit very early next year. Well next year for those who didn't help out with the Amplitude Kickstarter in a huge way…

If you happened to be one of those backers for Amplitude that threw down at least $40 then your wait will be even less as you'll have access to the game on December 23rd. Looks like Christmas will come early for those gamers out there who really, really, wanted to see Harmonix bring Amplitude back to life. You paid double the price of the digital download version the world will get ($19.99) and now you get to play Amplitude a few weeks early. Hopefully it won't get tossed aside in the mix of all of the other games that may or may not be gifted to you this holiday season.

As if the announcement of when we'll be playing Amplitude wasn't enough it looks like we have a nice taste of the songs that will be included in the game when you pick it up. You will most likely be quick to note that a lot of the songs here in Amplitude are not huge named artists and a lot of in-house work. This is at the core of what Harmonix said they wanted to do with Amplitude this go around but given the talent we have already heard and seen over there I am sure these will quickly be some fan favorite titles. Have a look and see what is coming for Amplitude.

Are you excited to see Amplitude making its way back here in the next coming weeks? Are you happy with the track list that we have here or do you hope for more expanded artists as the life-cycle of the game progresses? Were you one of those who will be getting Amplitude weeks earlier than the rest? Let us know in the comments and discuss. As Amplitude is being shown off at the PSX this weekend by Harmonix we may see a bit more for the game before the launch. If we do we will have it here for you so be sure to stay locked into the site for all of those updates as they come.