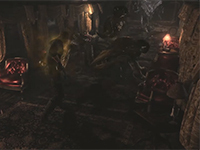 If you were looking for more reasons to pick up Resident Evil 0's HD remaster in January then you may need to sit back and watch the most recent interview that has been released. In fact if you want to know more about the "wacky" modes that Capcom is shoving into Resident Evil 0 HD just before January of 2016 then you may want to have a look as well. It is good to know all the basic ins and outs of your game before you spin it up right? Also given how long Resident Evil 0 has been out so far you shouldn't really need to worry about spoilers would you? Of course not.

So what we have here is another video interview for Resident Evil 0 HD where Tsukasa Takenaka talks about the work that had to go into bringing the game back to the current-gen systems. It includes interesting facts on how some of the original Resident Evil 0 textures used were only left in because no one could truly see what was going on with them. For instance one of the developers on a poster that looked fitting for the original version of Resident Evil 0 but now that we can see things clearer changes needed to be made. I'm guessing they didn't want a fully visible version of their face in the game now.

Also we get our first solid-ish look at Wesker Mode in Resident Evil 0 HD here. It isn't a way to play through the game from the side of Wesker but more along the lines of placing the Resident Evil 5 version of the character into the events of Resident Evil 0 with all the craziness that entails. Of course you can only unlock this mode after completing Resident Evil 0 HD's story the first time. It is a means to help break up the horror aspect of the game for those who need levity in their horror games and such I guess. Or for those who just want to walk though Resident Evil 0 as a super powered being.

What do you think about Wesker Mode for Resident Evil 0 HD here? Are you impressed that Capcom did the work they did back then even though it took years for us to finally see it all as they wanted? Were you hoping for a different form of gameplay with Resident Evil 0 HD's extra mode or are you happy now? Let us know and feel free to discuss in the comments below. As more for Resident Evil 0 comes to light we will have it here for you so be sure to keep an eye out and locked in to the site for all of that.