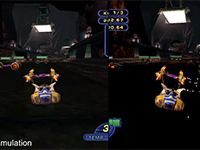 Looks like PS2 Emulation is on its way to the PS4 so we can finally have some backwards capabilities with the console now. It has been confirmed by Sony so there is no more debate but based on some titles bundled in with the Star Wars Battlefront editions PS2 Emulation is here and it looks to work well. Few details have been officially stated about it but if things are true from what Digital Foundry found it looks like there is more that PS2 Emulation mixed into this whole update. Some rather interesting things in fact.

All of this came about again after being rumored earlier this year when Super Star Wars, Star Wars: Racer Revenge, Star Wars: Jedi Starfighter, and Star Wars: Bounty Hunter were fired up and a few things were noticed by the group. It looks like not only will there be support for PS2 to be run but this PS2 Emulation will also fix a lot of the "jaggies" that plague other emulators and will also include Sony's patented retroactive trophy system. As you can see in the video below the PS2 Emulation used for these titles actually does have a trophy pop for the classic PS2 title.

Sadly this is all we have on the PS2 Emulation for the PS4 at this time. It is confirmed and those who picked up the version Star Wars Battlefront that includes all of these classic titles can get a taste for now. Hopefully it is only a short time until we can all spin up those classic games again on the PS4 even if it is only through PS2 Emulation. I am not sure how this will affect the remaster market that seems to be booming but those old classic games are not going to be dust collectors for much longer. At least if the PS2 Emulation pans out even more so than it already has.

Are you excited to see where this PS2 Emulation on the PS4 will go? What titles form the past would you like to see enabled here and ready for emulation? Do you think that this PS2 Emulation will harm the remaster market or just for companies into looking forward as we play the nostalgia? Let us know and feel free to discuss in the comments below. As more on this PS2 Emulation comes out we will have the updates here for you so be sure to keep an eye out and stay tuned in here for more.