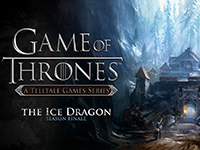 We Sit Down And Review Game Of Thrones: The Ice Dragon. This Is The Sixth Episode Of Telltale's Take On HBO's Famed TV Franchise. Here's Our Review On How They've Done So Far

It has been a long time coming and we finally have a wrap to Game Of Thrones from Telltale Games. With almost four months since we last dug into the game there has been a lot at stake to keep this franchise based on the HBO version of Game Of Thrones going and fans wanting to see what happened next. We were able to do just that and sat down with Game Of Thrones: The Ice Dragon just to see where our choices led all of house Forrester. Get ready to sit back and read our review of this episode as well as an overall thought on the entire first season of Game Of Thrones.

Since last we left off House Forrester the shit has hit the fan and in the way that it always does in Game Of Thrones. Mira is still in King's Landing dealing with the bullshitery there. The Forresters at Ironwrath are not in a good place and looking to war. Gerad is on the wrong side of The Wall and still looking for the North Grove. We are also dealing with the major loss to the Forrester house that we chose in the last episode of Game Of Thrones. Everything is coming to its apex here and it is time to see if we can get Iron From Ice.

This has been my biggest gripe about Telltale Games' Game Of Thrones and it still sticks. In fact it is my only true issue with this episode but held over the course of the season. It took too damned long to get each episode of Game Of Thrones out. As I've stated in other postings and rants I began to forget the overall story of the game and the excitement faded away. It has been almost a year since the first episode of Game Of Thrones was released and some of the choices that came back to haunt me I frankly didn't remember due to the time line. I know this seems to be the way that they go with their titles but with such an intricate story as Game Of Thrones has had it would have prospered more with a stricter release schedule.

Of course this issue has now been resolved with the release of all of the episodes of Game Of Thrones and the physical version available but for someone like me who didn't want to wait a year it just took to damn long and required a lot of attention to keep up with everything.

I've been a little bipolar in the past about the story of Game Of Thrones here. Hells, the writing seemed that way as well but now that the bigger picture is available and it can be seen in a grand format I think this is a story line that has been better than some of what has been produced for HBO to date. The time delays just helped emphasize the lulls in the story but when all is said and done you can feel for each of these characters and their plight just as millions do when Game Of Thrones airs on TV. There are a few loose ends left open based on my choices but nothing to upsetting to where I feel lost and empty when the end credits rolled on. Sure I want more but how it all came together will make the wait for Game Of Thrones' inevitable second season something I can bare.

Again like the story, the weird gameplay mix ups and additions and removals seemed weird until now but they all received a shining moment in this episode of Game Of Thrones. Almost like the rest was just getting you prepared for this episode; as is the case on the show for the characters. What felt out of place or unneeded in terms of combat and QTE mechanics before were all blended in to completely aid the story here and had it not been for the time lapses I could see the bigger picture better. Until then they were all mish mashed up to me or only served a very small purpose during that particular episode. Sure, I would have loved to see them all blended through the whole season of Game Of Thrones but it just was not the case. Telltale Games just saved it all with a perfect marriage in the end.

I don't think I have ever felt my choices matter more in any other title as much as I did in Game Of Thrones: The Ice Dragon. Sure there was an epic one at the end of the last episode but each one here felt like it had an ending altering change to it all. I am sure we will see a multiple endings video up online soon, as there are none as of this writing, but just as the second season of The Walking Dead ended the choices in Game Of Thrones definitely mattered. Unless we are always forced to go down the path no matter what, even with the two different plays I had for this episode I received something that felt different each time. Something I felt was lacking until now.

Lastly comes the "epilogue mechanic" as I am going to call it. To this date I don't think I've experienced it in any of their other games, and if I did it didn't hit home like it did with Game Of Thrones, but unlike other titles we ended with the major characters of the game recalling the events from their point of view alongside the list of choices we made in the whole season. I know we usually get to see the lists and how a majority of people chose to go but here in Game Of Thrones we were able to hear how it affected the other characters beyond the basic story. Almost like they wanted to sum up what they thought of us based on our choices. This also placed a nice wrap to the overall story and made the choices feel like the mattered even more here in Game Of Thrones.

If you are actively not a fan of Game Of Thrones in any fashion at all then you should stay away from this game. You won't get it or enjoy it. Everyone else on the other hand should read this all as a solid recommendation to pick up the full season of Game Of Thrones now. Most of my issues with the season in whole were emphasized with the release schedule each episode had. Now that you can go from start to end in one small sitting I can see them being minor annoyances that could never be fully fixed in a video game setting. It all builds up to the right place and you will be happy that you were able to enjoy it all. It has a great story, look, and gameplay bits that in total make up an amazing time. I fully recommend Game Of Thrones after The Ice Dragon and not to play it in a delayed format at all.