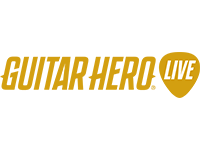 We Sit Down And Review Guitar Hero Live. Things Have Been Changed Up Quite A Bit This Time Around To Make The Franchise Feel New; But Does It Pay Off? Here's Our Review Of Guitar Hero Live

Looks like the rhythm game is trying to make a comeback and now we have the other main competitor in the way of Guitar Hero Live. This franchise is one of the ones that made the whole genre as popular as it has become over the years, even with its short hiatus, and FreeStyleGames is bringing it back to try and bring new life into the franchise. Not only is it a new game with, technically, new songs but Guitar Hero Live adds in a few new features and mechanics to said genre but do they help or hinder in the long run? Here's what we thought as we review Guitar Hero Live right now.

None. That is unless you don't try to build up a reason in Guitar Hero Live that the "live" band is playing all of these shows and why their interactions on stage occur. Other than that this is a non-applicable section in the review.

With Guitar Hero Live we are introduced to a new form of playing the music than we have been used to over the decade. For those who do not know we have moved from five different color buttons all next to each other to six set up in two rows of three. This is to help simulate playing cords better in Guitar Hero Live than in other franchises sans-one. This isn't what I hated here though. The difficulty differences that FreeStyleGames has set up that has earned the ire here. The learning curve is so very steep that it was extremely scary to try and play any track over the "Casual" setting as anything lower consisted of just strumming and anything higher than "Regular" required you to be a seasoned guitar player already.

There was really no easy way to move up the difficulties other than diving into Guitar Hero Live and dealing with all the jeers and boos over and over. It would have been nice to have a smooth progression through in Guitar Hero Live so I could have felt like accomplished something by learning the next step instead of being booed for not being able to be a Rock God after learning the basics. A nice middle ground isn't too much to ask but I guess FreeStyleGames was too busy on other aspects of Guitar Hero Live to ensure that kind of progression flowed nicely. Patience is going to be needed greatly to master this game.

While I do love the idea of being placed into the rock arena and had video playback on stage in Guitar Hero Live I am not sure that it was executed perfectly here. Due to the rather large leap in difficulty mentioned above it was pretty much impossible to watch anything going on in the live performance off the track. When I did get a moment to glance around though it also felt like all of the performers of Guitar Hero Live didn't get how personal space worked or that I didn't want to be eye-fucked on stage. It's not like Activision couldn't afford people who knew they had to act like the camera was a guitarist and not a floating camera right? It could have just been the way I was looking at it all too but it unsettled me in Guitar Hero Live more than added to the enjoyment.

Lastly here, and other rhythm IPs fell prey to this too, the "on-disc" tracks of Guitar Hero Live felt very bland and like the same recycled crap that the publisher and developer enjoy and not what really feels good for a game like this. This is a guitar game yet by the second set I was playing "popular" music that happened to have a guitar track mixed in but was more in the rap and dub-step categories than anything. I get the want for diversity in Guitar Hero Live but with guitar in the title of the game all of the on-disc tracks should be heavy on the guitars and the diversity to be accepted later via DLC or, in Guitar Hero Live's case, GHTV.

I know I hashed on it before for being too difficult in transition, but the new mechanics for Guitar Hero Live were a great change for the genre. Trying something new is always a scary thing but FreeStyleGames did manage to nail that on the head. Yes I would have liked it to be a bit more forgiving on the difficulty scaling but the six button set up here did what it was supposed to do in Guitar Hero Live so well that I still enjoyed it greatly. It made me leave my comfort zone quite a bit but when the end of the gameplay session rolled around I felt like I was doing way more than just pushing buttons along with the rhythm of the songs. My fingers ached as I imagine true artist's to ache. That's a good thing.

I haven't mentioned it yet, and for good reason, but GHTV is the true selling point of Guitar Hero Live to me. It does suck to say because as I mentioned above Activision did pay a lot for the "live" performances but the endless and playable mode of GHTV wins it all. For those still not in the know here, GHTV is the 24/7 playable music video library added on to Guitar Hero Live that has a great blending of traditional guitar songs and all of those "popular" songs people just want to play and hear. Mix in the fact that you get the real music video for said song mixed in; this makes GHTV THE way to play Guitar Hero Live for me.

GHTV is also where all of the extra cost comes in for Guitar Hero Live but even this was done in such a way that it lands on the "loved" side of the fence. Unlike other IPs, the latest songs to be brought into the Guitar Hero Live library through GHTV feels so much better as if you play through the normal channels, you do have to wait for the song to come up but you don't have to pay for it. The micro-transaction seem to only come in if you are so impatient to play a song in Guitar Hero Live and want to have it on demand. Or any of the other small extras someone may want in the game for that matter. Then you pay for tokens, which can actually be earned for free by just playing GHTV, with real money and play until you run out.

If you are looking for another traditional rhythm game I'll have to say that Guitar Hero Live will not be for you. You'll want to look at Rock Band 4. That said, if you want to have a new challenge in the rhythm genre without needing to learn how to play a real guitar first, then FreeStyleGames has the game right here for you. It is by no means the perfect game for all and has its issues but you do have to applaud that they tried to make Guitar Hero Live an innovator instead of another yearly released title. They could have done better with the stage performances but once you unlock all of the songs for Quickplay or just take the time to get into GHTV, Guitar Hero Live is what is breathing new life into the rhythm genre and not just helping it limp on.

I would recommend picking up Guitar Hero Live for sure but if you haven't had it drilled in enough yet do note that it is nothing like you are used to in this franchise; but in a good way in my eyes.

Guitar Hero Live was developed by FreeStyleGames. Guitar Hero Live was published by Activision for the PS3, PS4, Xbox 360, Xbox One, iOS, and Android on October 20th 2015. A PS4 copy of the game and guitar controller was provided by the publisher for reviewing purposes.