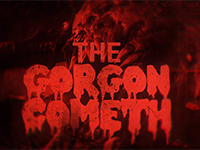 We've seen a few of the new hunters coming to Evolve with the Hunting Season 2 DLC sometime before the end of March of 2016. Now is the time to see one of the new monsters and it looks like Turtle Rock Studios is bringing the Gorgon out to play and stalk the wilderness. This isn't your traditional version of the Gorgon of mythology though and this one will be quite different in Evolve. In fact this isn't the snake-like turn you to stone monster but a spider-like creature? Say what 2K Games?

It's creepy. It's crawly. It is the Gorgon and you can kind of see her in action just below in the following trailer for this Evolve monster. I'll be the first to admit it is a weird name to be given here and am surprised that Turtle Rock Studios didn't call here Arachne instead but who know but them? She has acid spit, uses webs for all kinds of things, and has the ability to mimic a "clone" of herself that explodes. That sounds a bit similar to another Evolve monster but semantics I guess?

Here are the Gorgon's special attacks in Evolve.

I am glad to see another new and creepy monster to join in the Evolve fun but it does seem a bit weird that they would go with that name given the power set. Gorgon doesn't scream spider with just the name at all. I expected a stone or snake like creature here for Evolve based on the name. Whatever floats their boat though. I just hope that she isn't as overpowered as the Wraith was out of the gate for the core version of Evolve. It certainly looks like she will but maybe the other hunters will help hold the Gorgon at bay.

How do you feel about the Gorgon in Evolve though? Is it the monster you think of when you hear the name? Do the spider aspects look like they will be fun to play with? Do you think that Turtle Rock Studios may have another overpowered monster in Evolve again? Let us know and discuss in the comments below. Once we get more updated about the Gorgon of Evolve in general from 2K Games we will have it all here for you so be sure to keep checking in for all of that.