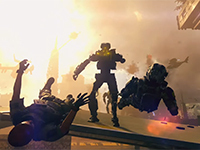 The launch trailer for Call Of Duty: Black Ops 3 has been released and not only does it show more Call Of Duty gameplay but it hits the right levels of hype for the game

Not much longer until we are all killing each other, virtually, in Call Of Duty: Black Ops 3 now. November 6th really creeped up on us and soon the launch will be on us. In fact I thought it a bit weird that Activision and Treyarch released the launch trailer for the game so soon until I looked at the calendar and saw that it was just about Call Of Duty and that it is right about on time for the releasing of a launch trailer. Where did all the time go and how did they crush it so fast to get the game to us?

As I mentioned though we do have a new trailer for Call Of Duty: Black Ops 3 to look at here as we hit the counting of days instead of weeks and months until its release. I don't know who is in charge of cutting trailers over there either but this one kind of hits all of the hype levels perfectly for the first time, to me at least, for a Call Of Duty game. If I wasn't excited to see how Black Ops 3 has pushed the franchise forward already this would have pulled my wallet out of my pants, drove down to the game store, and pre-ordered Call Of Duty: Black Ops 3 again for me without me moving a muscle. Can you feel the hype? Maybe it is just the music mixed with the visuals though?

Okay, hype all aside here. Doesn't this make Call Of Duty: Black Ops 3 look more like a Terminator game here? Robots and cyborgs destroying the planet and such? I know Treyarch has much more planned for the game here but that is what I also see in this trailer once I take away all of the hype and nostalgia with the franchise and elements used here. By no means am I trying to say that they are ripping these things off to make Black Ops 3 into a game like this but it is what I can see here. It still doesn't drop my hype for the game here but it does raise the question of why we haven't seen a Call Of Duty: Terminator game now. Where is that game?

What are your thoughts on this latest trailer for Call Of Duty: Black Ops 3? Does it hit the same levels of hype in your brain that it did in mine? Do you think that Treyarch or Activision should do a Call Of Duty: Terminator game now that you can see glimpses of what it could be? Have I just lost it and my cybernetic implants are mucking things up? Let us know and discuss in the comments below. There is still time before Call Of Duty: Black Ops 3 releases and I know that there is more planned to be shown and announced so be sure to check back in for all of that once it actually drops.