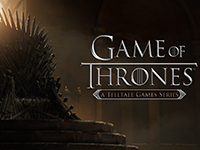 The time has finally made it and we are getting the conclusion to Game Of Thrones' first season as we now have a release date for the episode. I guess we should really say the time is almost here as Telltale Games has slated the final episode, The Ice Dragon, for November 17th for the PS3, PS4, Xbox 360, Xbox One, PC, and mobile devices. Only about four months after the last episode of Game Of Thrones came out and half a year since HBO's most recent season of the show has come to a wrap. Timing just never seemed to match up as proposed for Game Of Thrones here now did it?

To go along with the release date for Game Of Thrones' last episode of the season it looks like Telltale Games is also giving everyone the chance to get hooked with the first episode. Currently it is available for all via whatever platform you so choose so if you want to get a bit of your Game Of Thrones on with the game here, then you have your chance and might want to get on top of that. Or you can wait until the above date to purchase the whole shebang as a season pass or in hard copy mode of the season pass. A true Game Of Thrones fan may want to have the disc case to present with pride after all.

Lastly, this is where we bring up a trailer for the new episode, there is no new trailer for the final episode of Game Of Thrones to be seen. That will most likely come in a week or two as we get closer to the release date. It is Telltale Games' MO. We do have a nice little trailer showing off the actors of both the HBO version of Game Of Thrones and the video game talking about their experiences with doing the voice acting work and the whole experience that has been crafted here. Well, more like three of the actors in the way of Emilia Clarke (Daenerys Targaryen), Natalie Dormer (Margaery Tyrell), and Iwan Rheon (Ramsay Snow). Don't look for much more than getting to see the pretty faces, lovely voices, and already spied gameplay footage for Game Of Thrones though.

Are you excited to finally get to see the conclusion of this Game Of Thrones story? Have you been holding out and will be experiencing it for the first time given the fact that Telltale Games just made the first episode available? Where do you think a second season of Game Of Thrones may go given the path that the HBO show is on as well? Let us know and discuss away in the comments below. Once we have a new trailer or anything for Game Of Thrones here we will have it up on the site so be sure to keep checking back and looking out for it all. You won't want to miss it.