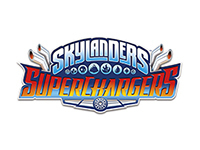 It's been another year and that means that it is time for more toys-to-life video games with the addition of Skylanders SuperChargers to the ever-growing franchise. Skylanders are back from Vicarious Visions and this time they have brought vehicles to mix things up and try to stop the evil lord Kaos in his tracks. Kaos and all of the other evil beings that seem to be under his employ or just trying to run amuck in the world of Skylands. We got our hands on Skylanders SuperChargers so sit back, relax, and get ready to read our review of the game right now. 3…2…1…GO!!!

Kaos is back and he has seemed to have been able to take over all of the portals from the portal masters. That would be you the player. Now we are cut off from Skylands and can no longer interact with the world…game over. At least that is until we are able to introduce the SuperChargers into the mix and are able to bring the pain back to lord Kaos; and bring it we shall. Now we charge off to set Master Eon free and reclaim the skies in Skylanders SuperChargers. But can we truly do it?

This may be a running theme in all of the Skylanders titles and it will be here in Skylanders SuperChargers as well. Why are we shut out of portions of the game just because we don't have all of the physical characters and vehicles? I know this is part of the way that Activision is trying to fill their wallets and keep kids waste deep in toys but in Skylanders SuperChargers we miss out on about two thirds of the game if you don't have a land, air, or sea vehicle. Each level has portions that require said vehicle and if you don't own it then you miss out. The starter pack only comes with a land vehicle so it is like we are being forced to buy DLC to get the full game. It most likely won't ever change but this is going to be a gripe until things are different to allow us to play 100% of the game even if we have penalties for not having the proper toys in the real world.

In Skylanders SuperChargers the huge focus of the game is now on the new vehicles and the characters that go along with them. They are new and different but it feels like Vicarious Visions spent more time on making them cool to look at and less on the actual mechanics to move them around. This could be my adult brain working but none of the vehicles I employed were easy to control or felt natural. You use the right trigger to accelerate and you would thing that means the stick to steer. The only thing is that in Skylanders SuperChargers it looks like the stick controls are only used to auto point the direction of the vehicle instead of steer. Think along the lines of isometric shooters and you'll get what I mean.

In connection to this, the weapons on the vehicles for Skylanders SuperChargers were also a bit on the clunky side to use. Some offered up an auto targeting so you could still stay in motion and not have to worry about aiming but this never really helped. There were many a time that I found myself in boss fights where the guns were aiming away or nowhere near the target and led to an untimely death in the game. Why was there no free-aim option with the alternate stick? Was this because Skylanders SuperChargers is aimed at kids with smaller hands or just an oversight? We may never know and it made Skylanders SuperChargers feel clunkier than it needed to be.

While it didn't feel like Vicarious Visions nailed the vehicle controls in Skylanders SuperChargers what they did nail on the head was the included BattleCast game. This little card game was basic and easy to learn and just as fun as Gwent was in The Witcher 3. This was one of the mini-games that I always on the lookout for during the main game and loved loading up just when I needed a break from playing Skylanders SuperChargers. Picture Hearthstone's attack and defend card tactics with the intent of ending the opponent's life with the leftover damage available to be dealt. Add the Skylanders SuperChargers spin to it and then you have hours of fun just on its own outside of the main game. Brilliant and I can't wait to play more.

Along with the addition of BattleCast in Skylanders SuperChargers it also looks like Vicarious Visions wanted to go a bit outside of the norm when it came to level design. Even in general when you take out the vehicle specific areas. There was a bit more side-scroller added in. Levels where you felt like you were in the mind of M. C. Escher and all kinds of new items mixed in. In fact if it wasn't for the shoddy vehicle controls Skylanders SuperChargers would have completely felt new and fully improved with all of these little additions and twists in the franchise. This is what innovation should be like and not just adding in toys to pad the wallets of the big name behind the game.

Lastly here for Skylanders SuperChargers was the overall story mixed into the gameplay here. The franchise has normally been geared toward children and younger players but just as Toy Story and other films like it, the developers add in enough adult-esque humor and fun to keep those over the age of 16 wanting to keep playing the game. On the surface the game does look like a kids game but when you take the chance you quickly see it is meant for all. I personally found myself finding the fun and humor aimed at the youngin's here making me laugh and that is what video games should be about: having a good time. Skylanders SuperChargers does that and does it well. The story and little quips here and there are just so well placed it's hard to not.

As with every Skylanders title out there the main issue most of us will always see is the price to play the game and that is no different here in Skylanders SuperChargers. We will need even more toys and money to be able to fully experience the game in all ways. In this case about two thirds based on the end screens of each level. The vehicle controls are also a bit tough to get under controls in the game but when all is said and done at the end of the day Skylanders SuperChargers is still a fun game to play. It is an investment but the additions kept my interests and wanting to keep playing. So beware of all of that. If you are down to spend more on a game than usual then Skylanders SuperChargers is worth it just as the rest of the franchise. If not then you may want to spend your money on other games. Sad but true.

Skylanders SuperChargers was developed by Vicarious Visions and published by Activision for the PS3, PS4, Xbox 360, Xbox One, Wii, Wii U and 3DS on September 20th, 2015. A Starter Pack copy of the game was provided by the publisher for reviewing purposes.