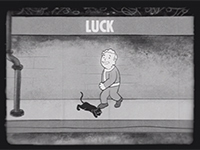 The final video for Fallout 4's S.P.E.C.I.A.L. series has been released and shows off how Luck will play out in Fallout 4

Hopefully when it comes to running and gunning in Fallout 4 we won't have to worry about the luck of the draw and more skill. That would at least be the hope for the gameplay and not just us all hoping to make it through Bethesda's game here. None the less though Luck is the seventh and final attribute we will have in Fallout 4 to survive the wasteland with and now we get look at how that will be employed in the game. Of course it is all wrapped up in the Fallout 4 S.P.E.C.I.A.L. video series and now we have the last one to hold us over until November 10th when Fallout 4 finally comes to the PS4, Xbox One, and PC.

All joking aside it looks like Luck will govern pretty much the same things that we can expect in Fallout 4. From scoring some great loot to being able to critically injure enemies to having another badass hero stumble upon and aid you from dying in Fallout 4; that is what it looks like Luck will give us. Seeing as Luck has its own progression tree in Fallout 4 I'd like to think that Bethesda has made it much more than that but based on the video here this is all we have to go on for Luck in the game.

I am a bit curious on how far Luck will be able to carry us in Fallout 4 here though. If we skirt all of the other stats in favor of Luck will we be able to survive just as well or will we need to spread the love around? I mean, Perception and Agility help govern the crit and hit rate on enemies in Fallout 4 but if we have a maxed out Luck rating will it even matter? These are the burning questions I need answered from Bethesda here and I am guessing we'll all have to wait until Fallout 4 is finally out and we are balls deep in the gameplay. So to speak of course…

What are your thoughts on Luck in Fallout 4 here? Do you think it will be as helpful if you max it out before other stats or has Bethesda thought about that and put in safeguards? Are you down to try a run in Fallout 4 where all you do is max out Luck and see how far that will take you? Let us know down in the comments and get hyped as this was the last video in the S.P.E.C.I.A.L. series. Hopefully Bethesda has more planned to give us for Fallout 4 and if/when they do we will have those updates here for you so be sure to keep checking in for all of that.