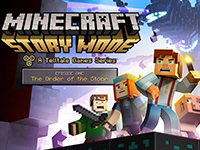 We Sit Down And Review Minecraft: Story Mode — The Order Of The Stone. This Is The First Episode Of Telltale's Take On Mojang's Famed Franchise. Here's Our Review On How They Did

If you've been looking to have a story for your Minecraft then now is the time to rejoice as Minecraft: Story Mode's first episode has been released and this is just what we are getting. Not only that but it is also coming from Telltale Games who have seemed to master the storytelling format in games and now aiming at Mojang's Minecraft. Who would have thought that a basic little block building game needed such an epic story to explain what the point is? At least that seems to be the case here for Minecraft: Story Mode. Either way sit back and get ready for our review of Minecraft: Story Mode's first episode, The Order Of The Stone.

It is the day before Endercon and Jesse and his/her crew are pepping to be the next big thing in the world of Minecraft: Story Mode. They get their idea together and set out to win the building competition. As things normally do, tragedy strikes and Jesse and crew are faced with a world ending event that is kind of their own fault. Given all of this they all band together to track down and help out the legendary heroes in the Minecraft world to stop the unspeakable evil and go out on your basic "end of the world" story in the hopes of making that not the case. Who doesn't like a world ending story?

Given the proven abilities of Telltale Games to tell a story it seems very odd that Minecraft: Story Mode seems to have the most convoluted and erratic story set up here. Entire sections of the story seem to be forced in just to give us more gameplay and stretch this part of the story out into more than a half hour segment. Their entire second section of the story where Jesse runs into the woods was just to set up how bad-ass a character is and bring her back into the story as she is needed for the whole plot. Something that could have easily been done just with simple statements and not an entire forced and unneeded section for Minecraft: Story Mode. This was not the only case of it but it was the biggest offender in my eyes.

Next up for complaint here is the Minecraft UI and aesthetic for the game. Sounds like an odd complaint given the whole idea of this game but it works for Mojang's game but not here in Minecraft: Story Mode. I missed quite a few QTE events as the triggers and motions blended in too much with the background and it wasn't until the failure animations played that I saw that I missed something. Extend this out to the characters and the world too. There was little done to make each stand out and soon everything became one solid blob or block that I had to stop and sift through to see things clearly. I am sure that nothing can be done about this as Minecraft: Story Mode progresses but I am hopeful something changes in the future episodes.

As I mentioned above, there also seemed to be no true consequences for failing or missing anything here in Minecraft: Story Mode. I never once received a game over screen for missing a QTE. I never felt like any of my choices I made had a single difference in the story or to the surrounding characters. In fact there is one character that it seemed like no matter what he was going to be bitchy and always angry even when I chose the path he wanted. It felt like I could have left Minecraft: Story Mode on autopilot outside of the few combat section and everything would have played out exactly the same no matter what. I thought my choices were supposed to matter Telltale Games…

The story and the UI may have been a bit rough to handle here in Minecraft: Story Mode but the addition of a great combat mode added in some fun to the episode. By combat I am not talking about just aiming a reticle over a target and pressing a button. There were a few times in this episode where you were placed right into a fight you would encounter in Minecraft proper. You would have to move about and swing your sword to kill enemies or trigger a cool killing move QTE or block and reflect attacks back at enemies. This by far was the best part of this episode of Minecraft: Story Mode and I really hope to see it make its way into other titles that Telltale work on just as long as it fits into the franchise or section.

The only other aspect of Minecraft: Story Mode that I seemed to enjoy was the crafting system that was brought over from the Mojang version of it all. It only happened a few times in this episode but it was a fun little puzzle that was added in and felt like you part of Minecraft instead of just watching a story built in the world. It really was nothing more than putting together items in the order dictated in the game but it was fun and apparently had hidden aspects that I missed out on my first run-through. It sounds odd to say but this little touch was completely needed and had me slightly forgiving some of the things I despised from above. I just wish we get more than what we did here in the first episode as Minecraft: Story Mode progresses on.

At the end of the day I am still not sold on Minecraft: Story Mode from this first episode. It didn't come out as strong as we know Telltale Games can do and it didn't suck me into Mojang's franchise any further that I already am. To give my recommendation to pick up Minecraft: Story Mode right now would be doing my readers a disservice here but I am hopeful that it will get better and be worth a purchase when all of the episodes have released. As of right now it just doesn't feel like it is worth the money or time to invest given the poor story and the fact that I have still yet to feel anything has an affect anywhere in Minecraft: Story Mode. Hold off for now until the next episode is released.

Minecraft: Story Mode — The Order Of The Stone