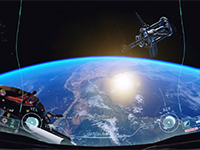 I believe this is the first time we have brought the first-person, interactive fiction game of Adrift up on the site before but that doesn't mean it hasn't been on our radar since it was first announced by Three One Zero. For those who don't know what Adrift is, outside of the genre description before, it is a story game that has us in space experiencing what it may be like for those who want to be up there. It is coming to the PS4, Xbox One, and PC with VR support sometime next year thanks to 505 Games for publishing Adrift. There are the basics so let's get into what we have now for the game.

If the above description doesn't sell you on the experience of Adrift then let us give you a look at the actual gameplay that has been released here recently. From what I saw it is pre-alpha footage and doesn't look to spoil much of the experience that Three One Zero has set up for us so you don't really have to worry about that here. My guess is that a lot of this will be changed or tweaked a bit before Adrift is finally released next year. So spoilers be damned!

What doesn't seem to be damned is the fact that the main character here in Adrift sounds to be breathing like they are constantly running a marathon or bumping uglies on a regular basis. This seems odd as one of the game mechanics we can see here in Adrift is the conservation of oxygen in our suit and this person is just going to town wasting it all. Even more so when it looks like we have to use that same oxygen in Adrift to move about from station to broken station floating out in space. So very odd and so very wasteful…

After seeing all of this I hope that I was correct in the thought that Three One Zero will be altering the final version of Adrift to combat this or at least let us turn down the heavy breathing when we are half full of oxygen. Who wants that embarrassing moment when you are experiencing Adrift in VR and all others can hear is the heavy breathing of a porno booming out of the speakers or head phones? I only assume it will be booming there as who would want to experience Adrift without the full immersion of audio as well. Throw in a plastic bag to choke on and we are golden…

Were you as bothered by the heavy breathing in Adrift as I was here? Do you think it is only really part of the section of the game that was being shown off by Three One Zero here? How about the look at the stunning environments while playing this video in silence? Let us know and discuss away in the comments below. As 505 Games allows more to be released to the world for Adrift we will have the updates here so be sure to keep checking in to see how Adrift evolves into a game we will all want to experience for years.