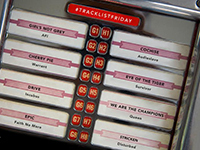 Time to make the track list for Guitar Hero Live a not so round number of 121 now as we have twelve more tracks to add to the list today. Quite a hefty starting catalog for FreeStyleGames to get in there and I'll take it. Especially since these new Guitar Hero Live tracks have all been pulled from previous Guitar Hero titles that Activision still has the rights to. Not only that but they are some of most fun songs from the back-catalog and range from Warrant to Faith No More to even Slipknot. Guitar Hero Live sure does have a winning track list when all is said and done.

Sure Guitar Hero Live is going to share some of the songs that we've already enjoyed playing through other games so this isn't the most breaking of news or updates but it is cool to see that we will all have options when the game finally hits the PS3, PS4, Xbox 360, Xbox One, Wii U, and mobile devices on October 20th. Activision is really trying to put some effort behind Guitar Hero Live it would seem to try and keep up with Rock Band 4. At least that is how it all seems to me.

If you have not been able to keep up with all of the Guitar Hero Live track announcements, it looks like FreeStyleGames has set up a Spotify playlist that houses all of the currently announced songs for the game. We have the new ones listed below but over there you can scroll through and see all of the Guitar Hero Live songs we are getting so far. I am curious if it will keep getting updated as the DLC and GHTV service expands for the game. I guess we'll see. How many of the new Guitar Hero Live tracks are you glad to see making a comeback here? Are you still holding out for more or do you think we have enough options here from FreeStyleGames? Do you have faith in the GHTV service to keep expanding or do you think it will fall flat? Let us know in the comments and discuss away. With only two weeks out form launch I am sure we still have more to expect from Guitar Hero Live and as the updates come, we will have them all right here for you.