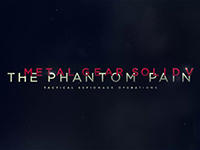 Metal Gear Solid V: The Phantom Pain starts up were Ground Zeroes left us with Boss and the destruction of Mother Base. We thought we were coming home for a job well done only to find it under siege and Boss being blown up to the verge of death. Fast forward a bit of time and we see that Boss has survived, has some new prosthetics, and is out to rebuild his former military base. Not to mention enact revenge on the man who orchestrated the whole ordeal. That where you learn about the true horrors of mankind in The Phantom Pain as plots of genocide and world domination crop up and it is up to us and the Diamond Dogs to stop it in its tracks.

One of the biggest complaints I have about Metal Gear Solid V: The Phantom Pain is the fact that if you happen to be online in the game everything takes forever to load in the iDroid UI. This is pretty much the main menu system that you will be controlling everything in The Phantom Pain from. This occurs even when you are checking things that are not linked at all to any of the online functionality of the game. At least any real online functionality like developing items for your missions and such. Of course this wouldn't be that big of an issue except that it also takes a massive amount of time to cancel out of the menus when you need to. By need to I am talking when an enemy is sneaking up on you and you happened to be in the system.

I don't know why this is even an issue in The Phantom Pain here. Just because you are connecting to Konami's servers for FOB and ranking information that doesn't mean the rest of the system needs to run slow. As an FYI for those reading this and finding the same issue in The Phantom Pain here, it can be overcome by disconnecting the game and leaving it off. Granted this means that none of your stats will be updated and none of the freebies that you get for playing the game will populate but that is a small price to pay for the fact that you won't be able to do much in the UI as it forces a connection.

Another interesting thing in The Phantom Pain, that I get was probably a fun idea but ultimately hurt the gameplay, is the fact that each of the core story missions have opening credits and closing credits for you to sit through. You can skip the closing credits of missions but what was the reason for this inclusion in The Phantom Pain? If each missions and story was written by a different person and directed in the same way I could kind of see it but this really felt like Kojima forcing his name to show up in Metal Gear Solid V more than Konami wanted in the first place. The game would have done fine with just one long ending sequence for beating the game.

Lastly, and this is more gameplay balancing, when The Phantom Pain was first shown off it was claimed that the enemies would change to fit your gameplay style. The example being that if you like to do all of your missions at night and only settle for head shots then all of the enemies of The Phantom Pain would start wearing night vision goggles and helmets respectfully. All other manner of items like this as well based on how you play. It was supposed to add a bit of difficulty or push for players to attack the game in different ways. Only thing is that they never stayed the same and the difficulty was removed in the same way.

In an example during my play of Metal Gear Solid V: The Phantom Pain, I would always go in at night and tranquilize everyone with head shots. After a mission or two what was claimed above happened. The only issue was that all I had to do was play one mission, side or main, in a different way and the game forgot about my preferred way of getting in and getting the job done. In fact there are some missions in The Phantom Pain where you have to go in guns-a-blazing and replaying these would make everyone forget that there was a guy out there at night shooting everyone in the head. Looks like the AI needs a bit of work or I am just a true master of Metal Gear Solid V: The Phantom Pain.

There was a bit of hate up there for Metal Gear Solid V indeed. But in the end they were all really nitpicky and minor; sans the last one. To start off with the love I'll have to go with that Kojima Productions knows how to tell a fun and interesting story. Even if things fall out of the realm of disbelief suspending for the era and past Metal Gear Solid titles cannon. None the less it hooked me in the first ten minutes and kept me hooked through another 70+ hours of gameplay in The Phantom Pain. Even when I thought it was all over I was hit with more intriguing and fun story. The highest of fives is due here just for the story and the way it was told in Metal Gear Solid V: The Phantom Pain.

Even if story isn't your main go to in games like The Phantom Pain everything that was improved upon in the gameplay department of Ground Zeroes was perfected more so here. The stealth mechanics worked just as you would hope them to do and everything was more fluid. On top of that, if you are just in it for the shooting, The Phantom Pain hit the nail on the head in terms of physics and 'smoothness' of shooting enemies out to get you. Aim assist is something no one will want here, even though it is offered, as everything in The Phantom Pain worked and moved just as you would expect and it was easy for anyone to master without the built in assistance that normally comes in games like this.

One of the things I was worried about in The Phantom Pain was the sheer amount of micromanaging and side missions that were tossed in. Some of them did feel a bit repetitious at times but the majority of them all felt like true smaller missions that Kojima Productions took time to craft and not just toss in like a collectibles in games. Even the extra layer of managing Mother Base in The Phantom Pain was fun. I actually had to set it back to automated at one point as I was getting too involved in making sure every captured or recruited soldier was where they needed to be. It was time consuming but it was something well worth it when all was said and done in The Phantom Pain. I just hope MGO continues to build from there.

Lastly, and this is a bit of shocker to me too, the multiplayer of FOB missions in Metal Gear Solid V: The Phantom Pain drew me in and had me spend a few days just playing those outside of the core story missions. These are the infiltration missions that we are able to do when connected online in The Phantom Pain. They allowed you to board and "hijack" other player's Mother Base and resources. Unlike other Multiplayer modes in other games, these truly felt like your skill in The Phantom Pain pays off and not just a run-n-gun style of things. Even though most played out like story or side missions there was that extra satisfaction of knowing that you are outsmarting other real gamers out there and not just an AI that can be figured out.

This is where I am going to put my full seal of approval on Metal Gear Solid V: The Phantom Pain. I have not had a game that has dominated all of my gaming time in quite some time. The Phantom Pain here grabbed me and has held onto me like Boss trying to squeeze information out of an enemy soldier. To that extent, even without the FOB missions, there is a whole lot to do in the game and the fact that the gameplay and controls make the experience that extra level of fun then you will have a game to fall back to constantly here with The Phantom Pain. Just by amount of time played and an amazing story to boot it is worth your time and money here. Tag on the current multiplayer and upcoming multiplayer and I think you'll be just as lost as I was in the game; in a great way.

To put it bluntly, yes you should own Metal Gear Solid V: The Phantom Pain. Even with the issues I had above I am still finding myself jumping back in to complete, and re-complete, missions just because it is an amazing time. Even to the point where other great titles are now collecting dust in the interim.

Metal Gear Solid V: The Phantom Pain was developed by Kojima Productions and published by Konami for the PS3, PS4, Xbox 360, Xbox One, and PC on September 1st 2015. A PS4 copy of the game was provided by the publisher for reviewing purposes.