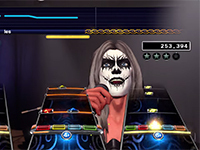 I don't think I've been this excited for Rock Band 4 or the franchise since GWAR was announced as DLC back in the Rock Band 2 days. I'm an odd one. Sue me. None the less it looks like another group of artists are making their way onto Rock Band 4 thanks to Harmonix the only catch right now is that they are pre-order bonuses for those who happen to pick the game up on Xbox One and not the PS4. At least as far as "at launch" and free Rock Band 4 DLC songs go. Currently that is the only way to pick them all up.

As you've read in the title above we are getting BABYMETAL and “Weird Al” songs added into the mix of Rock Band 4 songs but they are only two of the twelve that are coming for those who pre-order off Xbox Live. I'd like to take credit for the BABYMETAL as it is one of the artists I have been hammering Harmonix for via the Rock Band 4 song request site. Now if only we could get the rest of artists/songs I've requested for Rock Band 4 in some form I won't need to look to any of the competition out there to get my music and video game fix.

If these tracks are going to be available for all Rock Band 4 players at some time; that is still up in the air. Of course it is only listed that these tracks will be free and available at launch for those who pre-order Rock Band 4 on the Xbox One so that could also read that PS4 players and non-pre-orderers may be able to purchase these songs at a later date via DLC. That's how I read it at least. Go ahead and have a look at the list though and see if it is worth it for you to pre-order Rock Band 4 on the Xbox One right now.

If that wasn't enough, it looks like Harmonix is also trying to take care of all of those XB1 gamers out there who are getting Rock Band 4 but don't want to have to re-purchase a whole band kit. All the controllers are backwards compatible for the PS4 version already but it looks like there is an adapter for Rock Band 4 on the XB1 that will allow for the same. You'll just have to buy it separately. But to show that they care you can go to Amazon and use their discount code to get said adapter for $15 less than the asking price and then you can bring all the 360 controllers over for Rock Band 4.

To get the discount you have to enter the code RB4ADAPTER when ordering it off of Amazon. That should drop the price to about $9.99 USD. Better be quick about it as I am sure it will fly off the shelves as I hope that Rock Band 4 will.

What do you think of those Rock Band 4 tracks as incentive to pre-order on the Xbox One? Do you think the PS4 version of the game will get the same treatment? How long until you think Harmonix will make all of those tracks available no matter how you choose to play or pre-order Rock Band 4? Still waiting to see a different artist/song? Let us know in the comments below and discuss away. As we get more updates for Rock Band 4 we will supply them here free of charge so be sure to keep checking in as I am sure this will not be the last of it all.