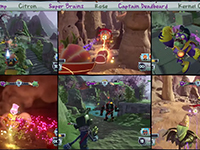 If you were looking for more on Plants Vs Zombies Garden Warfare 2 then you have come to the right spot as we have more on the upcoming title hitting the PS4, Xbox One, and PC next spring. By more we are talking about a little more in-depth looks at the six new characters that are making their way into PopCap Games' title and slightly more lore on each. At E3 this year we had a small glimpse at these characters in action in Plants Vs Zombies Garden Warfare 2 but we were limited to the zombies only team and only had names and images shown off for the plants around EA's booth on the floor.

Now we get to see them all in action in Plants Vs Zombies and not only in text form or in the form of impressive CGI videos that are aimed to make the game look a Pixar movie based on PopCap Games' franchise instead of a video game. Then again that is the normal PR bullshit that sells video games when gameplay, like we have below for Plants Vs Zombies Garden Warfare 2, is what the intelligent gamer is on the lookout for. At least they should be. Enough of that though, let's dig into the "new" characters in the game.

We have three on each side and they follow the same standard build of the previous characters in Plants Vs Zombies. Each zombie has a plant counterpart to off-balance them. There is the Upgraded Imp and Citron, Super Brains and Rose, and then Captain Deadbeard and Kernel Corn. Each of which have their own moves and attacks in Plants Vs Zombies here but more or less altered version of previous attacks that fit into the new character's motifs and backgrounds. There are also a few other tweaks mixed in but the people from PopCap Games can explain it all better than I can right below.