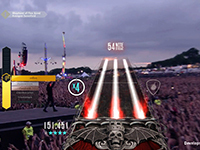 For the most part it the title above kind of explains the news here for Guitar Hero Live and the latest Premium Show that has been added to the list. It looks like Avenged Sevenfold is getting another crack with an Activision title here as we will get to play the three song long set here in FreeStyleGames' title in way of a live concert. For those who don't know Guitar Hero Live's Premium Shows are special "shows" that will unlock during your gameplay and completing various in-game challenges. The word on what will need to be completed to unlock this in Guitar Hero Live will be to pre-order the game before it launches on October 20th.

The other word we have word on here for Guitar Hero Live's latest Premium Show would be the songs that will be included in the live performance we get to mimic. You read that correct. It will be only three songs long but looks to feature the live performances of the song in terms of crowds as Guitar Hero Live is set to do. Outside of the live concert footage being used there will also be a themed Avenged Sevenfold note highway and the promises of more to come for Guitar Hero Live. Always with e the "more to come" comments here and nothing solid from FreeStyleGames. I guess we'll have to wait.

Here is said list of songs we will get to pretend to perform in Guitar Hero Live. At least those who pre-order the game and secure Activision is going to make the money back on Guitar Hero Live. Also most likely a paid DLC further down the line but that isn't set in anyway or form; just my speculation. Does this make you want to run out and pre-order Guitar Hero Live right now? Will you just wait to see how well FreeStyleGames did and then hope that the Premium Show will be available via DLC at a later time? Where you hoping for a different band to get this treatment? Let us know and discuss all of your Guitar Hero Live discussions down in the comments. This technically pushes the track list of