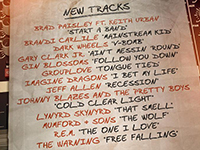 The time has come and now we have all of Rock Band 4's on-disc tracks revealed to us. All sixty-three of the new songs we will be enjoying on our PS4 or Xbox One here on October 6th when Harmonix brings back their famed franchise to us all. Do know that this will not be the last of the new Rock Band 4 songs for launch as there are upward of thirty-four more songs going to be available via DLC at launch depending on where you pre-order Rock Band 4. So some people may have nearly one hundred tracks if this is their first foray into the Rock Band lifestyle here. Veterans will of course be near the thousands.

So what we have here for Rock Band 4 is more Lynyrd Skynyrd, Imagine Dragons, and R.E.M. for starters with a whole bunch of other "new" artists mixed in. Some new in terms of Rock Band 4 and others new in terms of creation date. I am sure they love Harmonix right now as this is going to get them some great exposure. Well, as long as Rock Band 4 doesn't crash and burn in terms of sales and gameplay. Given the history though and what I have already played of Rock Band 4 I don't see that being the case out of the gate. The game did feel mostly complete back in June at E3 in terms of gameplay and just needed the library set up.

Here is the final list of songs for you to spy on for Rock Band 4. Have a look and see what you'll get to experience once the game fully comes to market. I am still hoping that my bands will make it to Rock Band 4 sometime down the line via DLC now as they are not on the official on-disc track list. One can hope…

For those who would like to see the full Rock Band 4 track list, here are all of the songs that will be on-disc when you buy the game.

Now that you've seen all of the on-disc songs for Rock Band 4, what do you think? Is it as strong as the previous versions of the game? Do you think Harmonix needed to add other "big" songs and artists to the list here? Are you fully satisfied and just want October to get here already so you can just play Rock Band 4 now? Let us know and let the discussion go wild in the comments. Hopefully soon we will have all of those DLC songs that will be coming to Rock Band 4 in the near future lined up and when we do we will bring them to you. Hopefully there will be as many updates to them as there were in the past versions of the franchise.