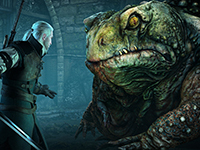 The first expansion for The Witcher 3: Wild Hunt, Hearts Of Stone, has a release date and some details on how it will expand upon The Witcher 3

We are getting ten more hours of new adventures and characters added to The Witcher 3 here. We are also getting a score of new monsters to kill, another romance to have and a new story line that is forged by our choices in in the game. Sounds like a pretty beefy thing here. It needs to be as it looks like CD Projekt RED is looking to get $19.99 USD for it. At that price point there needs to be a lot added to The Witcher 3: Wild Hunt with this DLC. That or, I don't know, more Gwent cards as that became a huge success from the game and Warner Bros. needs to ride those coattails as long as possible.

Step again into the shoes of Geralt of Rivia, a professional monster slayer, this time hired to defeat a ruthless bandit captain, Olgierd von Everec, a man who possesses the power of immortality. The expansion lets you choose your own way through an adventure that includes recruiting a crew of break-in artists, spending a night partying with a ghost and outsmarting the most bizarre creatures Geralt has ever faced.

Along with the digital release, gamers will also be able to purchase a special, limited boxed edition of Hearts Of Stone (MSRP $19.99/19.99€) available at selected retailers worldwide. The box contains a digital download code for the expansion, two masterfully crafted physical decks of Gwent, the card game set in the world of The Witcher, and a detailed manual explaining the rules. With two unique sets of cards, Monsters and Scoia’tael, ready to go, players can now engage in tactical combat on a grand scale outside of The Witcher 3: Wild Hunt!

Are you ready for this new DLC for The Witcher 3: Wild Hunt or are you looking to just get the first wave of Gwent cards out of the gate? Are you excited to see all of the new in-game content CD Projekt RED has cooked up or are you still all flustered that Gwent is going to be an official, physical game? How far do you see Warner Bros. riding that one out? Let us know and discuss down in the comments. As future DLC and updates for The Witcher 3: Wild Hunt come out we will have them all right here for you so be sure to keep checking in so you don't miss out on a single thing.