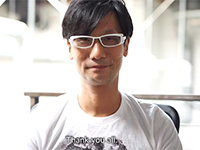 Since Metal Gear Solid V: The Phantom Pain is now out and available for all on the PS3, PS4, Xbox 360, Xbox One, and PC it would make sense that we have a nice little launch trailer to celebrate with. It is the normal thing and Konami usually goes right along with that don't they? Especially since The Phantom Pain has been getting some great reviews and sales are going strong. (Our official one is still in the works as of posting, but coming) That all said it looks like Hideo Kojima had something else in mind to give fans of the game and the Metal Gear franchise instead of the tired and old. It has been a 28 year long run so there needs to be more right?

More we shall have as instead of a trailer for The Phantom Pain we are getting a solid goodbye from the mind that has had us confused, intrigued, and engaged for so many years. Given all of the flack between the developer and his studio and Konami it seems a little odd they would allow it but none the less it is what has been given. You can see the video in its entirety just below but do note that there isn't anything from Metal Gear Solid V: The Phantom Pain in the footage outside of some nice interviews with members of Kojima Productions, voice actors, and a nice little tearjerker of an ending. Something that only myself and those like Snake or Boss could hold up against.

No more gilding the lily as I like to say. Here is your "debriefing" of Metal Gear Solid V: The Phantom Pain and a nice little thank you to everyone who has made it possible. This includes us fans out there. Enjoy.