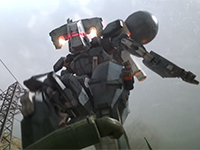 We are now officially a week out from Metal Gear Solid V: The Phantom Pain's release on the PS3, PS4, Xbox 360, Xbox One, and PC. Next Tuesday, September 1st we will be giving Kojima Productions' final foray into the Metal Gear franchise before departing Konami and moving on to other things. It will be a sad time but it looks like The Phantom Pain will be bringing us so much joy and "ultimate story" that we can overlook all of that and just pine for the game when not in our hands. The Phantom Pain has looked to be one of those titles that have the ability to last for quite some time even if you don't take part in the online multiplayer aspect of it all.

As with most games, and as promised by Kojima for a while now, we have a launch trailer to look at for Metal Gear Solid V: The Phantom Pain. Not only a launch trailer but a nice long walk down memory lane from back when Metal Gear Solid was a small, yet innovative, title on the PS1. If you could care less about seeing all of that promotional stuff for The Phantom Pain though it is worth noting that there is a bit more to be seen in terms of gameplay and I am pretty sure story bits. Although I still question why the Gears look way cooler and more advanced as we go back in time in the Metal Gear Solid world. The Gear you are about to see looks like it could destroy anything we saw in Metal Gear Solid 4 and then some.

But wait; there's more. Along with the launch trailer for The Phantom Pain we also have updates of another sort. It looks like the companion app from Ground Zeroes is making its way back for The Phantom Pain and will be available for the PS3, PS4, and Xbox One versions of the game. For those who don't know, this adds a second screen ability to Metal Gear Solid V: The Phantom Pain where you can use your smart device as a live map for the game as well as listen to all recordings and music that you find in The Phantom Pain. It will be your own personal iDroid that can be used without having to "pause" the game and look at it from Snake's perspective. All of which will be available on day one of launch.

It would be cool if the companion app for The Phantom Pain gave you the full functionality of the in-game iDroid but I have a feeling that since Kojima Productions couldn't get the thing to work with the Xbox 360 or PC that all those other functions just were not possible here. Either that or Konami didn't want to spend more on the The Phantom Pain budget for something they didn't see many people using to get the real "Snake" feel to the game. It's not like it is the last Metal Gear that is going to be made with the team that started it all after all…

Enough of me prattling on about Metal Gear Solid V: The Phantom Pain; we want to know what you think. Are you ready for the Ultimate End to the story here or do you wish that there was more incoming in the years? Do you think that Konami will still pump out more Metal Gear Solid titles after this one obviously succeeds? Would you use a full iDroid app if Kojima Productions actually threw one together for The Phantom Pain? Let us know and discuss down in the comments. Now that all of the promotional stuff for The Phantom Pain is out all we have to do is sit back and watch it play out; pun intended. Where else to do that but right here?