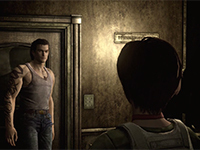 It seems weird to be talking about this now but we have the E3 demo of Resident Evil 0 Remaster live and ready for all of you to view. It only took Capcom about two months and a few conventions to finally allow this footage of the demo out to the world but at least we have it. Up until now most of us only had the Resident Evil 0 Remaster E3 trailer to look at in terms of visuals and how the game may have been upgraded for the next gen systems. Now we have one of the community poorly playing through the ten minute demo just for us to see Resident Evil 0 Remaster. That also means that we have it down below just for you.

I know we have all been waiting for this, unless we were able to actually play Resident Evil 0 Remaster at any of the other interim shows that have since then, so I won't hold you back much longer. Plain and simple though it does show how horrible the classic controls were for Resident Evil 0 and that we have the option to change to a version that we more intuitive like we've had the recent versions of the game. It also shows that everything else really looks the same but you can be the judge for Resident Evil 0 Remaster on your own with the below "let's play" video that Capcom has finally given us.

Just like the trailer we had for those not able to play this Resident Evil 0 Remaster demo at E3 I still question where all the effort went into the textures here? I am not seeing much of an upgrade outside of the ability to play Resident Evil 0 on the next gen systems and such. Maybe this is why we are getting a full on Resident Evil 2 remake instead of a remaster as Capcom has seen what the fans can do and are willing to do for free. Maybe that is why and that they are just going to wrap Resident Evil 0 Remaster to make a few bucks before the huge blow out as they are still most likely a ways off from Resident Evil 7 or something truly new for the franchise.

I guess I was just hoping for a lot more than we should have been for Resident Evil 0 Remaster. I should have only looked at it as the cash grab it is going to be for fanatics of the franchise and this title and those who have not played the original version yet and want to. I will say I kind of hope this is the last time they touch Resident Evil 0 though. I don't want to see there be a remake of all of their older titles because the Resident Evil 2 one makes a huge splash. We need new ideas and games and not the old ones altered enough to make us think it is a new game when it is the same old experience we've had time and time again.