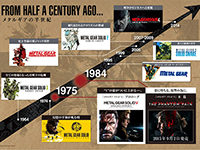 It's a little crazy to think that we've been playing Metal Gear Solid games for almost thirty years. Twenty eight to be exact and it has been one hell of a ride that Kojima has taken us on over the years. I guess that will make the ending of Metal Gear Solid V: The Phantom Pain much more emotional as it will be an end to a rather lengthy run. Konami has said they want to keep the franchise rolling but The Phantom Pain will be the end of the franchise with the man who started it all. Unless the new team can bring the awesome like we have had over the years I see it fizzling out and then slowly dying off.

Not too unknown is that fact that the Metal Gear Solid franchise has jumped around in the timeline of the world to craft a really weird and compelling story line. Anyone who has played the franchise would know this as well as anyone who has access to the internet. In the interest of not making you have to search the web for where Metal Gear Solid V: The Phantom Pain falls into the timeline, as well to help Konami promote the game, the great people over at PlayStation have given us a nice flowchart of the overall timeline in Metal Gear Solid V and where every title lies in our history. Even if it is kind of weird to see the higher tech gizmos before 2014… Now that you know where The Phantom Pain falls it's time to get a bit more hyped up. We've had loads of gameplay showing off the new game from Kojima already but one of the itching questions over the years is looking to get answered here as the below trailer claims. That question being what finally makes the original hero of the world turn to his evil ways. This apparently will be finally and fully answered in The Phantom Pain. It only took three decades so there better be a great answer that isn't that Snake was betrayed or lost a great love. We've already seen a bit of what motivates him in Ground Zeroes but that could just be the tip.

Metal Gear Solid — A History Of Metal Gear And PlayStation

Can you believe that it has been this long all to end with Metal Gear Solid V: The Phantom Pain? What do you think is the tipping point for Snake that we will get answered here? Do you think the franchise will continue on, and do it well, now that Kojima is out? Let us know what you think in the comments and discuss. Metal Gear Solid V: The Phantom Pain releases on September 1st and I think that Konami has a few more things locked away for just before so be sure to keep it here for all things Metal Gear Solid until we get the franchise's ultimate end…and then most likely a revitalization sometime after.